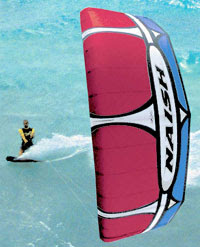 North - to NorthWest winds are offshore down here on the Gulf Coast.

Today we had offshore winds.

But today, something was different. Joe, a fellow kitesurfer (and CEC Officer), showed me Dauphin Island.

Google Earth this place and you will see the closest thing to kitesurfing paradise this side of the Outer Banks. North winds are onshore here. 1.5 hours door to door. Makes you wonder what it would be like ripping downwind from Gulfport to Cat Island - and have someone in an inexpensive john boat waiting to pick you up and take you back to the mainland.

Of maybe Mississippi should build a bridge to one of their barrier islands...

46 degrees when I was pumping up an old (but in great condition) Naish X4 12m - 3/2 fullsuit with a hood - nicely powered - awesome session! It did warm up nicely. BUT NO PICTURES TODAY - after I came in for a break, I rigged the GoPro, launched and the wind died. Better luck next time (or I should have rigged it from the start). I did get several large jumps in (but no photo evidence this time).

And to top it off - the last road on the way to the Western part of the island (where we were kiting) is named Velasco - destiny!!!