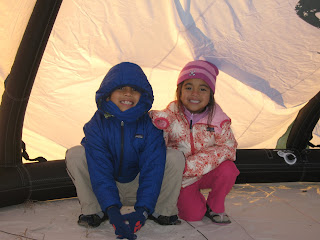 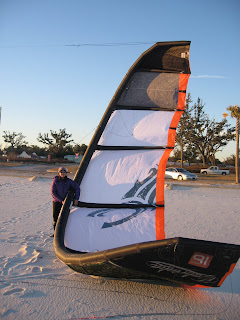 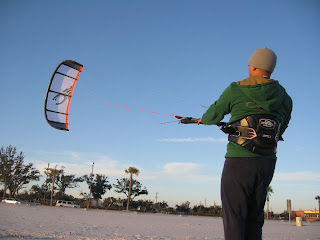 We finally got a day where it wasn't

a. Raining
b. Too cold to emerge from the cave/house
c. A requirement to celebrate a Holiday or Birthday
d. All of the above

So we broke off our root balls and headed to the beach.

La took off on a paddleboard run and even managed to catch some runners on the inbound legs.

I did all the unpacking protocol on the 16m Crossbow (testing line setup, removing all the tags, trimming any excess threads, etc) and pumped it up for the first time.

I was able to self launch the kite with the carabiner trick (keeping the chicken loop tensioned with a carabiner hooked into it with the other end tied off to a pole/stake/immovable object - then picking up the kite, setting it on the edge of the window and running back to the bar to hook in).

After doing some 'S' turns on the beach, La came in from her paddle and landed the kite.

So as you can see from this post and the other recent kiting ones, my new kite quiver is white and green Crossbows. Yes I am color coordinated and I am proud of it.