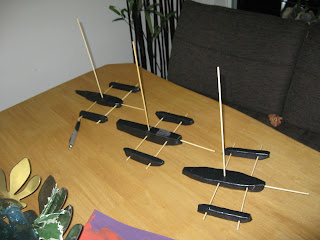 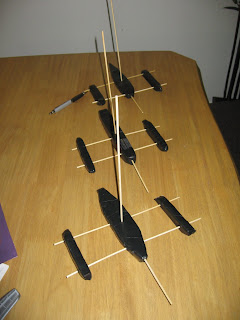 So the proas from yesterday were cool, but the paternal drive to ensure the kids have cool beach toys made me go back to the drawing board today.

I built the ones from yesterday with a old technique I used when I was a kid - cut the sides and the deck in sheets and tape them together. The ones I used to build were catamarans - about 16" in length (my Dad had access to longer sheets of styrofoam - today I save the foam trays from the fish we buy).

The fact that the buoyancy needed to be shifted forward on the proas prompted me to build new amas. I was just going to change out the amas, but layering the foam for the amas made me think that I could use the same technique on the hull - so I started building the hull(s). At the same time I resigned myself to build trimarans (and gave up on the outrigger/proa designs - for this run anyways).

The mast and the struts are bamboo skewers.

These were a blast to build and the kids enjoyed seeing the difference between yesterday's boats and today's.

Not bad for a rainy day project.

I kept the pen in for size reference. I actually like these smaller boats compared to the ones I used to make - easier to transport and store (and Noe says they are cute). How can you argue that? 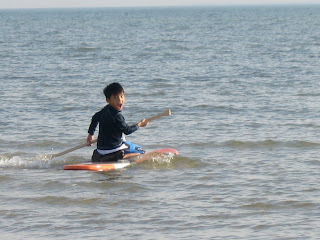 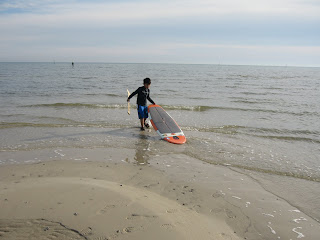 Marlon asked me to bring his board out today.

"Jack of All Trades" Board 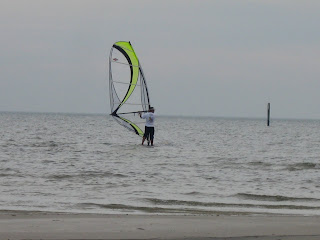 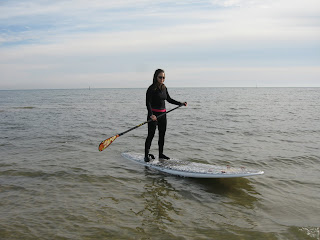 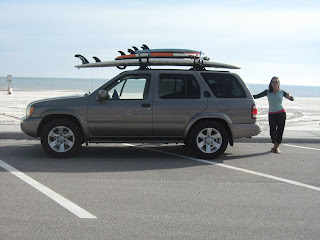 So versatile - La paddled it and I was getting upwind with less than 5mph wind. I nailed a bunch of jibes too - bonus points! 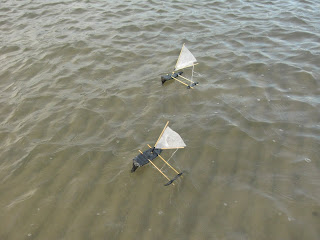 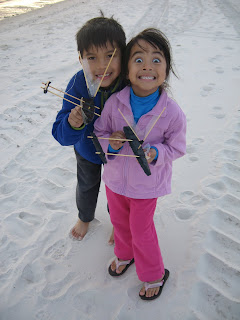 I made the kids their own model outrigger sailing canoes. Made them out of styrofoam trays, electrical tape and bamboo skewers. They sailed really well, but they need more forward buoyancy.

They aren't true "proas" becuase they have a directional bias (with a rudder on the back) - real proas "shunt" instead of tack/jibe to move through the wind. Shunting is just going back the other way (hopefully with some ground gained). 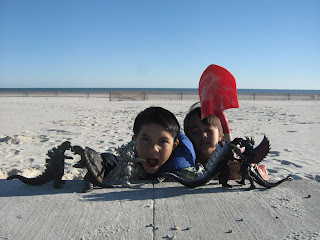 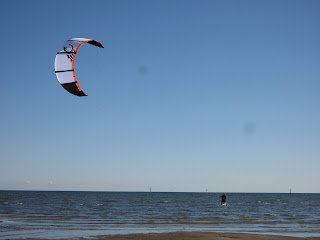 I have been SWAMPED at work hence the lack of posting, but despite that - the wind seemed to be pretty good on Saturday afternoon (the day I couldn't go out) and again on Sunday afternoon.

We hit the beach and the anemometer read 11 mph coming out of the SSW (perfect for the 16 Xbow!!!!)

Problem was the tide was super low (I didn't bring the CF thinking there wasn't going to be enough wind - a point I will be correct on - keep reading).

I launch the kite and start wading out to deeper water. I tried getting out 5X only to hit ground 5X.

All the while, the wind starts dying back - until eventually the kite falls out of the sky - of course while I'm standing 100 yards off shore.

Walk of shame (but neat how i"m so far off the beach and still in calf high water).

At least the kids had a great time (Big M and Noe were playing with the Godzilla toys - they were emerging from underground!!!) 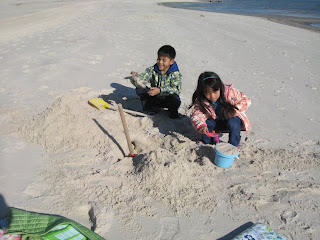 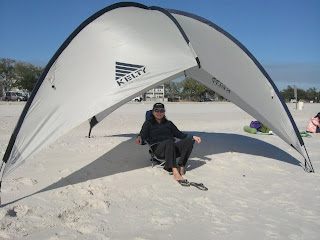 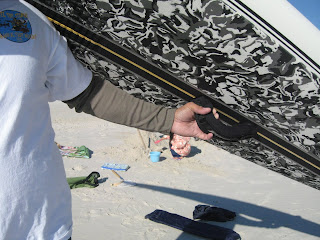 1. Got the kids out of the house and onto the beach. They played with Godzilla(s) and Gamera and had a great time.

2. I had installed footstrap inserts on the 11'2" (and brought it out with the intentions on windsurfing - wanted to see if carrying the board with the strap and the rig was easier). The wind was dismal so I got a decent paddle in. 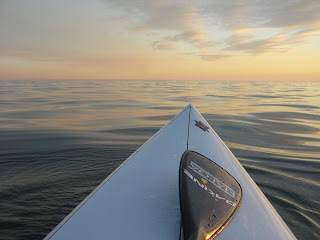 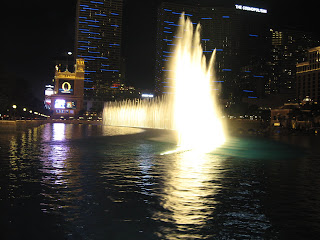 I had to go to Vegas for a 2 day conference.

Yeah it was pretty cool, but to tell you the truth - without my family there, it wasn't the same (now that I've got impending orders for a year unaccompanied over my head, time away from La and the kids is even worse).

I did stop by the Bellagio to get our wedding rings cleaned - La and I eloped in Vegas nearly 10 years ago and we got our rings from Tiffany. It was neat that I could go and get them cleaned at the same place we bought them.

I could keep going on about how that they are cleaned and look just like new that we're good to go for another 10 years.... blah blah blah - but I won't - you get the picture.

So - what's the amphibious link here?

The fountain at the Bellagio!

The Discovery Channel did a special on the behind the scenes for the fountain works once and ever since then, every time I see the fountains, it is even neater.

Wind was up BUT 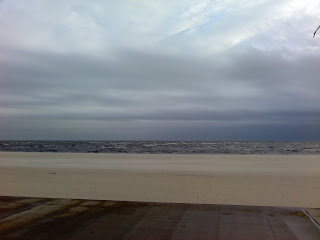 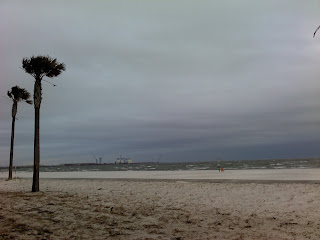 Warm Tropical, Crystal Clear Water - how are you kidding 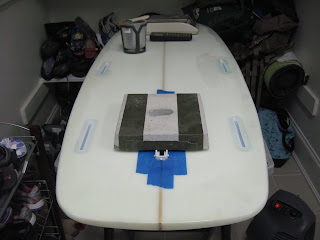 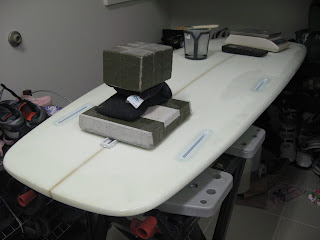 No sense waiting until tomorrow for what you can do today -

I mixed a small batch of epoxy (~2 ounces mixed product) and got the finbox set in place.

As always, with the taped up surround, it made clean up much easier.

Now I get to do more "productive" work tomorrow - grinding, sanding and maybe painting...

It'll be nice to finally get this thing in the water, but I firmly believe "patience" is a virtue. Now I just have to figure out what color to paint it.
Posted by Victor Velasco at 1/08/2011 06:48:00 PM No comments:

Routed Out the Box Fin Box 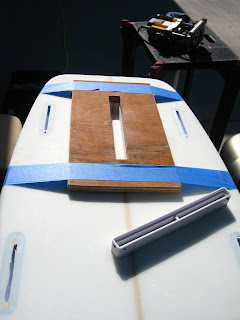 No kiting for me.

I did use some of today to clean up the lightwind kiteboard. Finboxes, leash plug, footstrap inserts and excess hotcoat all were taken down.

I also routed out the slot for the finbox. I'll mix up a small batch of epoxy tonight to set the box in place.

If the weather sucks tomorrow (good wind, but rainy), I may actually paint the board and make the final preps for taking the board on the water (we'll see).
Posted by Victor Velasco at 1/08/2011 01:51:00 PM No comments: 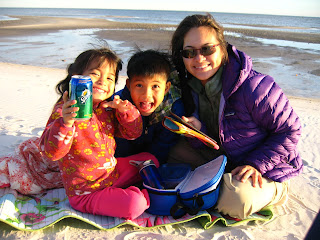 The flags up on the flagpoles were showing decent winds.

We chilled out (literally - the temperature dropped pretty quickly) on the beach until all of us except Marlon (who was running around burying his plastic animals) were pretty cold.

It was a pretty low tide too. 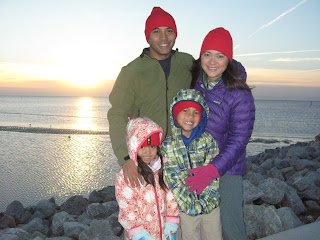 We have a small tradition - we wake up early on New Year's Day and go some place where we can see the Sun rise and take some pictures.

10 years ago, I was under a blanket with La and we woke up on the beach on the windward side of Oahu to welcome in 2001. There were bugs flying around our ears and Ironwood roots poking up out of the sand, but damn if we were going to miss the millennium turning.

10 years later and we are still at it!

And now we have two kiddomaboos to make our own party to boot!!! 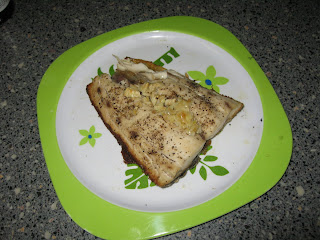 Late afternoon paddle at West Pier for exercise in some gnarly offshore winds - 15 with gusts past 22.

If I had a chase boat, Cat Island would have probably been less than an hour away...

Went home and grilled some mahi.

Take a piece of foil, place the salted/peppered fish and place it skin down on the foil. Put the butter and garlic on top, wrap lightly and bring it out to a fired up grill. Cook for about 20 minutes (the butter will keep the fish moist).

The skin should just about slide off at this point.