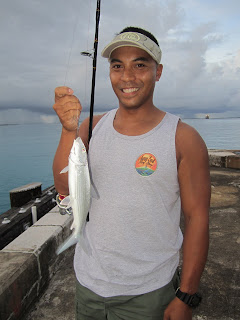 My jet lag is still kicking my butt. After sweating in the afternoon sun fishing, then catching the three aforementioned fish, I had the uncontrollable urge to take a nap - 1800ish.

I reset the squid bait on the hook and cast out past the piles. I then laid down on the curbing, leaned the pole across my chest, placed a wrap of the line around my inboard hand and placed my visor over my eyes. Two seconds later, I dropped into a nice late afternoon nap.

I jumped up and started reeling in and this bonefish was on the end of the line.

I've lost a lot in this description - like the three other guys laughing at my wrapped up hand moving around while I was asleep. Like the "Zero to Hero" instant jump up - reel in move I executed once they decided to wake me up. And the juggling I had to do with the bonefish to get him off the hook and back into the water (not quite lumpia sized).