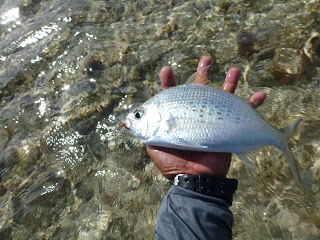 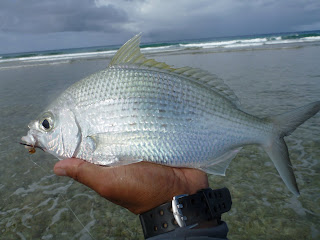 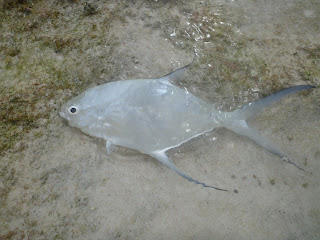 Flyfishing this morning down at the Southern part of the island.

I hooked into a bonefish that subsequently broke off not only the fly, but the entire tippet.

After that, I thought I hooked into another one, but instead it turned out to be a pinfish. I caught a second (bigger one). These guys have some fight in them - not as intense as a bonefish but good nonetheless. They even look similar to bonefish in the water - olive/electric green backs, narrow profile, travels in schools, etc.

As I was dealing with the second pinfish I hooked, I saw an entire schools of bonefish breeze on by - like they were waiting for me to get distracted. That was the last I saw of them.

I was walking back along the shoreline and I saw some darts schooling within a few feet. I cast the fly and just pulled the rod back - WHACK! The dart went hysterical for the bitter fly! I landed a fish each time I cast - about ten of them by the time I reached the starting point.

All fish were caught and released.