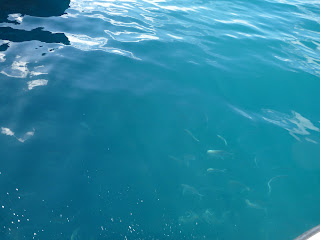 We headed straight for the marina and took out a Mako. We headed south for the normal trolling spot and dragged squid skirts around for a bit. We only had an hour total so we had to be picky where we went.

We didn't get one bite.

That is until we were headed back in.

We drove over this school of Big Eyed Trevally. None of them hit the lures. The picture shows them pretty clearly, but the school was really big - just weren't hungry.

Then we said "heck - do another pass"

The middle line (medium heavy spinning rod that lost the other squid lure this weekend) started singing as line peeled off the reel.

The fish just kept taking line and made a beeline for the shore. I was finally able to stop it with the drag. It jumped and showed a long silhouette and dark shading. After five or so minutes of fighting, it jumped again - I thought it was a tarpon.

I finally reeled it in to the boat - five foot barracuda - as thick around as my upper thigh.

The three of us stood there wondering how we were going to get the hook out of its mouth. I definitely wanted my lure back...

The big guy solved the problem for us by finally biting through the leaders aft of the lure head.

This was one that got away - but to everyone's benefit!!!