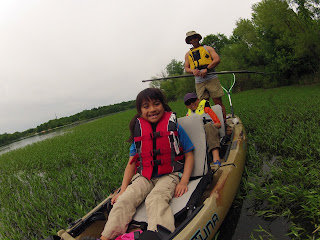 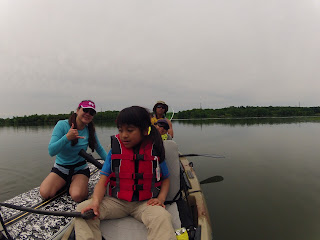 Catch up post from last weekend. Beaver Dam Reservoir. We went looking for the dense population of carp we saw as the air temps just started to rise - but they weren't there anymore. We did see a bunch of schools of tiny fish (we didn't have a net fine enough to catch them to see what they were - but with the timing, I suspect they are hatching carp) and a few sunnies poking out from the newly grown grass - which leads me to the subject of the post. This kayak kicks butt - we rode right over the dense grasses and got in to the spots where the carp were hanging out (albeit a few weeks too late). But the kayak also offered tons of storage space to satisfy thirsty paddlers and hungry tummies. So this thing is both an amphibious assault craft and a mother ship that can carry the kitchen sink.
Posted by Victor Velasco at 6/02/2013 03:38:00 AM