At the place I am renting a room, the backyard has access to the canal system in Kailua. I've posted before about the veritable plethora of fish swimming around within easy reach of the backyard. Well - I took a few minutes this morning to see if I could tease a fish into a game of tug-o-war. I did get one taker - and only one. I has a killer bug and a green weenie on a tenkara rod and got nothing but annoyed looks from scores of tilapia. It was incredibly frustrating - the complete opposite of catching bluegill back in Reston. Well - at least I got one to take the fly (green weenie). 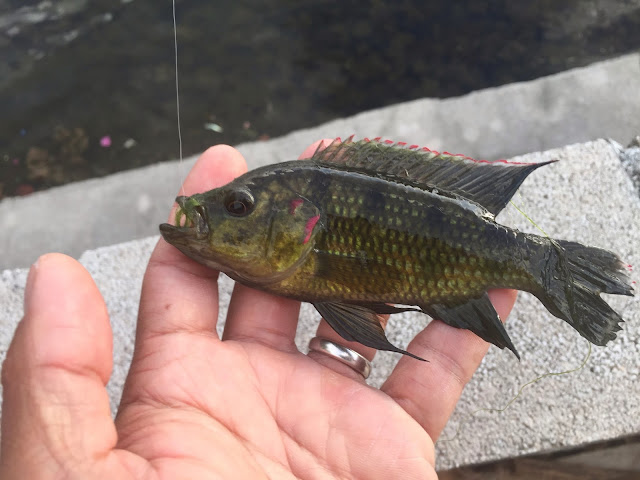 I did see a bunch of fish jumping around about a 25' cast away - maybe a barracuda accosting a large group of tilapia??? And I did get a visual on a 7" white trevally swimming around among the tilapia... So two things - first I'm going to have to figure out what the tilapia are interested in eating so I can tie up some more appealing flies. And second - I'll have to have a second rod rigged with some papio/kaku crack flies to hook into those passerbys.
Posted by Victor Velasco at 5/07/2015 04:10:00 PM