Marlon and I hit the beach again late this afternoon.  Waist high on the sets and a 0 tide, this is probably the lowest tide I'd feel comfortable foiling on a 24" mast.  I took the Slingshot Infinity 76 out again, and altering only one variable, I had the mast centered forward of the box midpoint.  I was able to get up consistently, didn't get thrown off (because of too much lift), and got some of the longest rides I've had to date on a surf foil.  Five or so rides in the hour of daylight that we had.

Marlon had to use his hybrid shortboard (dinged La's longboard last session and I have not had the time to fix it).  He got several ride and also the chance to try out a new rash guard/insulated top he got recently. 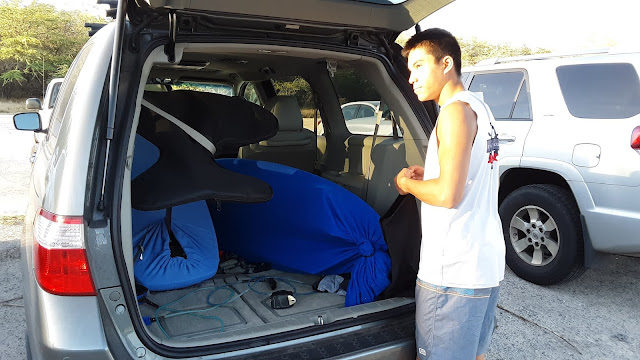 So after 3 months and several tries, I think I can say that I can manage the very basics of foil surfing.  I have a ton more to learn (like turning without falling off, and controlling the pitch of the foil more), but at least I can stand up and get the board to lift out of the water and not get thrown around!!!
Posted by Victor Velasco at 3/16/2019 10:27:00 PM