I finally went Windsurf Foiling again - just about two months since the last time I went out (and cracked the nose of the board).  I brought the Naish Lift 5.7 and 4.7, with 400 and 370 mast respectively.  I also brought the Maliko 200.  The wind was blowing stiff at the beginning of my session (1615) but rapidly dropped.  Initially the 4.7 lifted, but after a couple of runs I figured I should change out the sails.  Here's the wet 5.7 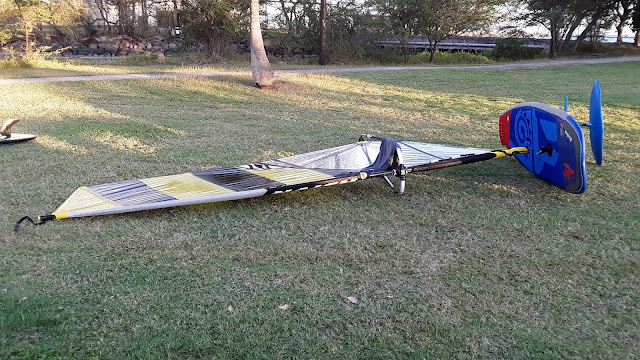 The 5.7 is a beast - lots of power.  It took a little bit to get used to the pull.  But true to the advertisements, you can dump the power when needed (duh - all sails are like that).  I was up on the foil a lot, but the earlier flights were not smooth and controlled - too much wind and too much lift from the foil.  I could tell when I was headed for a breach and a few times the mast got away from me (headed for the nose).  I checked the nose after each crash - the high density foam nose guard and the light weight mast seem to be doing the trick.  As the sun continued setting, the wind smoothed out and at just under 12 mph the 5.7 and the Maliko worked perfectly together - I got two runs with perfect control and stability.  I even tried pushing a jibe (failing in a blaze of glory).  Have I mentioned I love this truck? 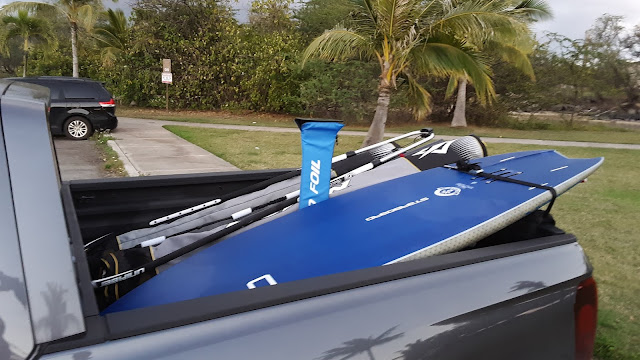 I am going to rig up the Slingshot FSurf Foil with the 78cm fuselage and see if pushing the wing forward makes a discernable difference in stability.  I'm thinking it will since that is why Slingshot is selling the FSurf with the longer fuselage and calling it the FWind.  Should be able to test that setup out this week (the wind is forecasted to hold).