The surf was absolutely perfect this evening - and Marlon and I both brought the wrong boards.  I brought the foilboard - which I had just finished cleaning up and putting deck pads on; the deck pads make getting foot placement simpler than using just wax - you can see instantly where your foot should go.  When I cleaned the wax off, I could see my heel dents so I pretty much just covered those spots.  I caught 7 tonight - the first 5 were flawless and lengthy rides.  The 6th ended in a breach and the 7th was short.  So this was the first time I batted over 50% (71%) - another milestone in this foiling journey.  I actually got to the point where I could feel when I had adequate front foot pressure and when I needed to apply more.  I'm crediting that to the fact that I haven't surfed conventionally this year (except that one time with the Greedy Beaver).  Retraining my brain and body to not "surf" on a wave, but instead to use the foil to move has been a long process - and there is so much more to learn still. 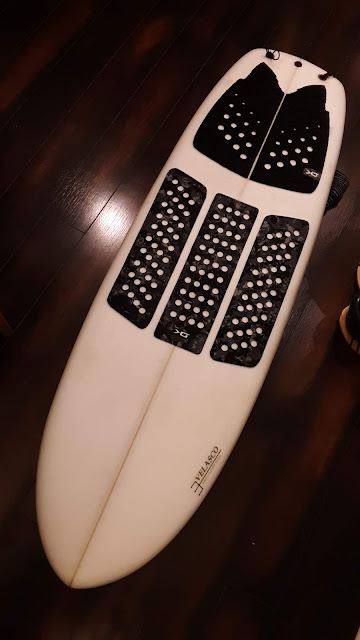 That said - the waves were so glassy and big today - head high and consistent - that I really should have been on the Greedy Beaver.  Marlon did bring out the 6'6" hybrid and he caught some fun ones, but he said it would have been even better if he had a longer board.

Hopefully this swell sticks around for a little bit (or not and I won't be tempted to break out the conventional equipment).
Posted by Victor Velasco at 4/28/2019 10:10:00 PM