Despite the lower tide, I decided to keep up with foiling on the Iwa.  On Thursday, I set the foil as far back on the tracks as possible (on the 5'2"). 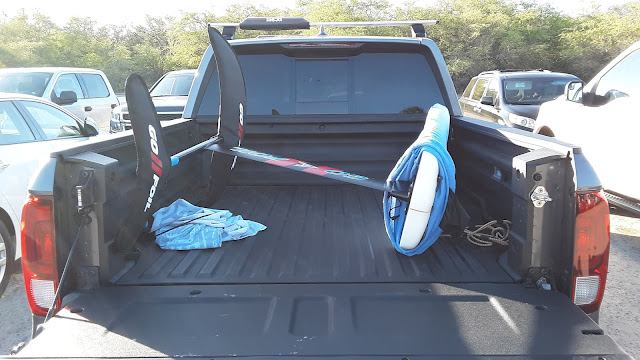 The lift was more controllable and I managed to get some pretty long rides.  I did hit the bottom twice while paddling (first on the way out, second while I was getting out at the end of the session).  Damage was minimal and I just need to get over this.  The swell was not small so some of the takeoffs resulted in crashes and burnages.

This evening Marlon and I went out and the swell was just a tad smaller (but still not small).  Same setup as yesterday and I got nearly the same results - just better.  More control (lighten up on the front foot to lift and down pressure to steady out).  On a couple of takeoffs, I was going way too fast - foil was humming and I popped out the back.

I did get some longer rides, pumped through some flat spots and was able to correct some back setups - so today was definitely better than yesterday!  Progress however small is always a good thing.  Marlon was back on La's longboard.  I saw him on a few rides - I think he is missing the thruster setup ;)

Another large-ish swell moved in this weekend.  Marlon and I went out on Sunday evening and again on Monday morning.  Lots of people in the water trying to get some of this swell.  I brought out the Greedy Beaver both days - and Marlon used the Wavestorm. 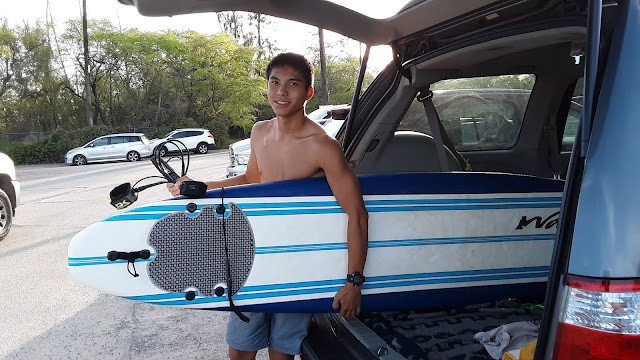 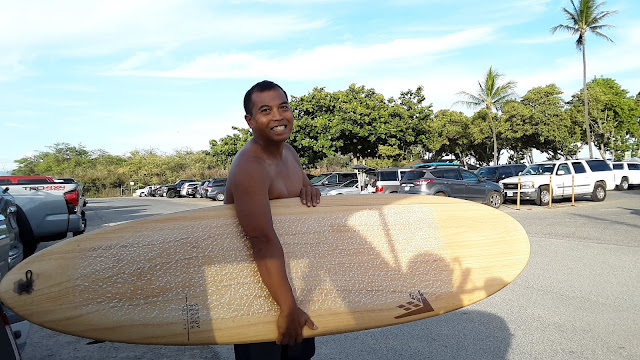 For me the swell and the tide weren't in synch -  and there ended up being a fairly large flat spot where no one was catching any waves.  Seems like you either had to be way out, or way inside.  Yesterday the board was a little more squirrely under my feet - I had a few great drops and decent rides - but also got worked on a few.  Today felt better on the waves I was able to catch - Marlon pointed it out that the wind was down from Sunday evening - cleaner equals easier takeoffs.

Today I also finished repairing the delamination on La's board (which Marlon has been historically riding).  Here it is all waxed up and ready to ride!  Another project checked off the list. 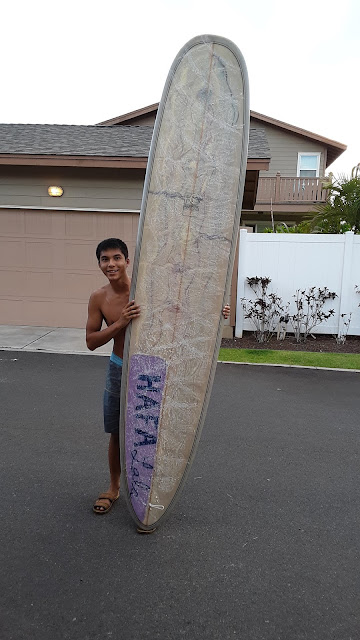 I'll move on to shaping Marlon's knee-paddling, nose riding, helicopter takeoff longboard next (tall order, but I'll give it a swing).
Posted by Victor Velasco at 5/27/2019 09:53:00 PM No comments:

I had to scope out a project on Kauai this past Thursday.  Here are some pictures of one of my favorite places on this planet to just hang out.  Niihau and Lehua in the background of Majors Bay. 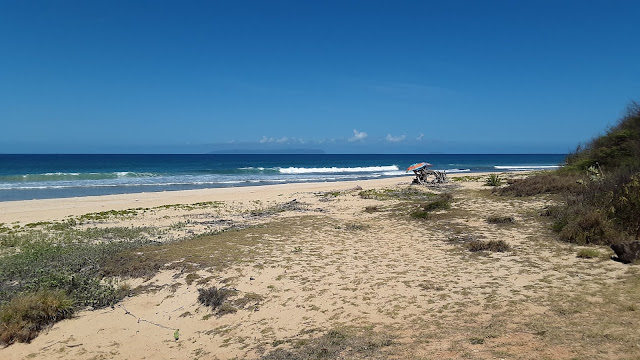 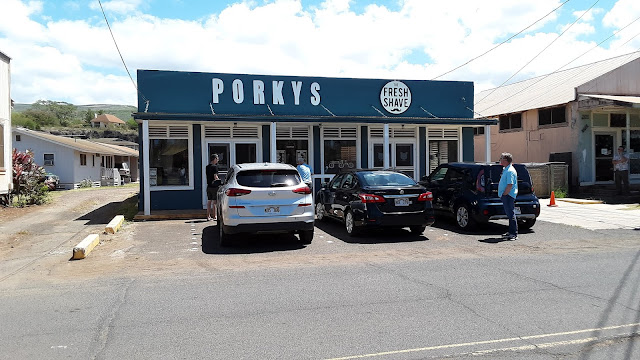 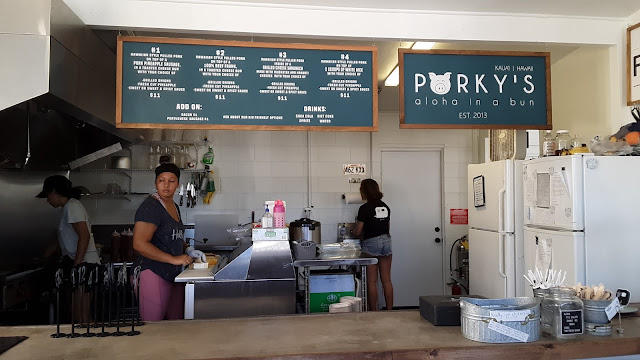 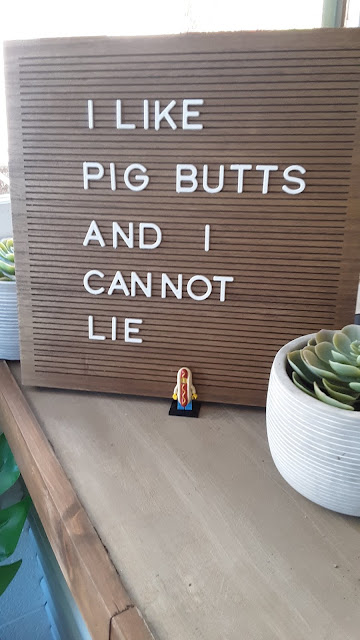 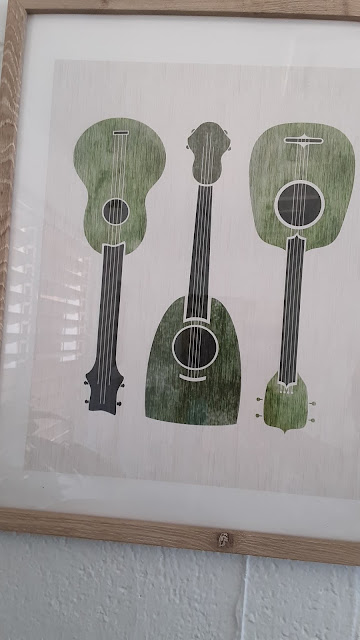 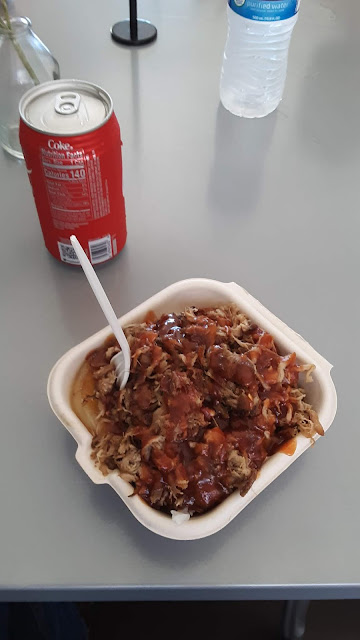 And I really wanted to bring these two back home - they wouldn't stop following me around.  Such a handsome couple! 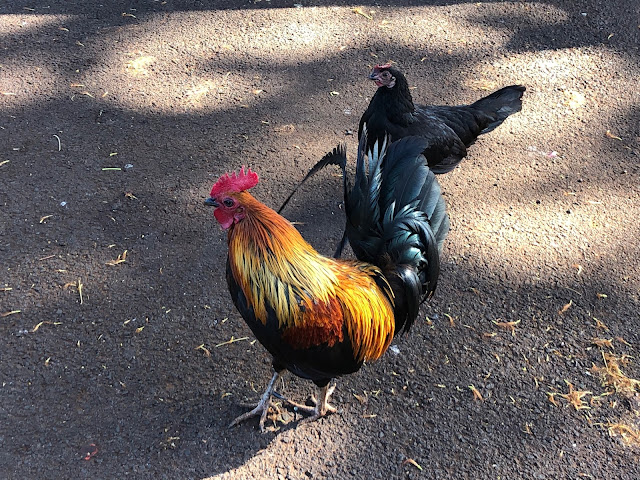 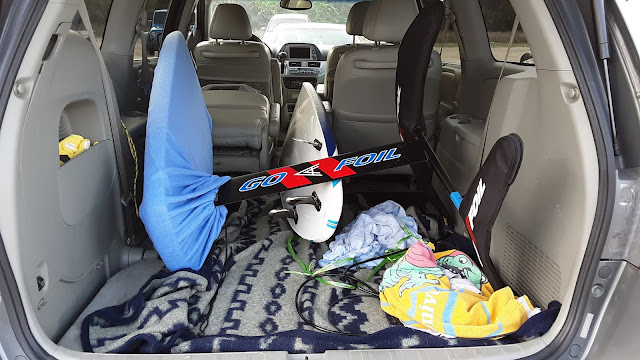 I dropped the foil backward in the boxes by a bunch (relatively speaking) - but the setup was actually harder to ride - or at least it seemed that way. 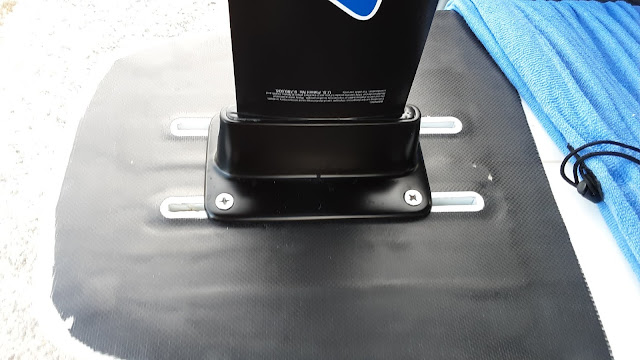 Thursday foil positioning - I recall thinking this was way too much lift. 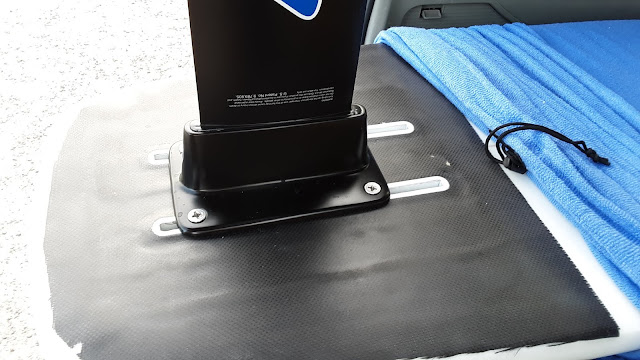 Saturday - this didn't feel much lighter on the lift.  Either I had better foot placement on Thursday, or I am regressing???  When I head out again I'll jam it all the way back.

The swell forecasted to arrive did not seem to have materialized.  But because of the moon phase I had to ride the outside section (so as to not run aground).  I got a few rides in between the brutal flingings (I went down face first on one and definitely saw stars).

Marlon was practicing his helicopter takeoffs on the Wavestorm.  Fun session!
Posted by Victor Velasco at 5/26/2019 08:20:00 AM No comments:

Leftover medium sized swell coming up from the Southern Hemisphere.  I decided to bring the Go Foil Iwa out.  With the plate adaptor, this rig is over 33" tall!!!  I was better than 60% up and riding - and the longer runs were way up.  I did breech a couple of times, but I'm chalking that up to having the foil set too far forward in the track.  I'll pull the foil back next time and see if that makes a difference. 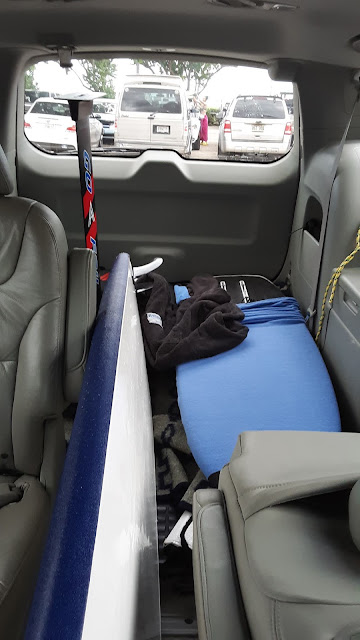 The Go Foil seems easier to get up and stay up on foil compared to the Slingshot.  Whenever the tide is super full (+1.5'), I'll bring this rig out - otherwise I think I'll hit bottom while waiting in between sets.

I also was using the 5'2".  I think it's time to go shorter permanently.  I can sense how shorter length is easier to pump the foil and easier for front foot placement.
Posted by Victor Velasco at 5/24/2019 09:25:00 PM No comments:

I've been ignoring this blog for a couple of weeks now - and not being able to take pictures while foiling (there is enough going on - like trying not to skewer myself, or doing everything to not breech the wing) has also made blogging different. 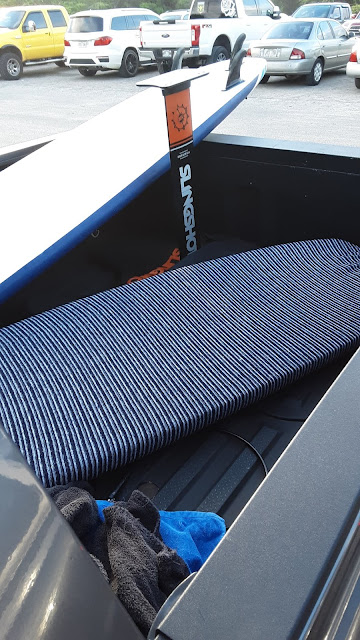 I did crunch down on the front wing while waiting for a set to come through - there are definitely some high points on the reef that you wouldn't otherwise know were there.  A little sand paper, some primer and some orange spray paint should do the trick. 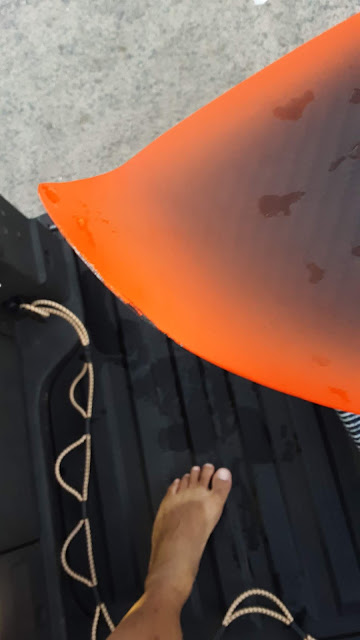 The first big south swell of the year hit on Mother's Day.  It was overhead on the sets and the direction was perpendicular to the beach at White Plains (so it was closing out the normal outer break).

Marlon caught some good ones and got pounded a few times.  I caught four good ones (but the rides weren't too long because of the closeouts).

I did not bring the foil because I want to mix things up (and I knew the swell had hit) - always a good time on the Greedy Beaver!

We hit the surf again this afternoon because we've got an event to attend tomorrow night.  The swell picked up a bit, but the really high tide made it difficult to pick up a lot of waves on the foil.  Marlon on the other hand was having a blast! 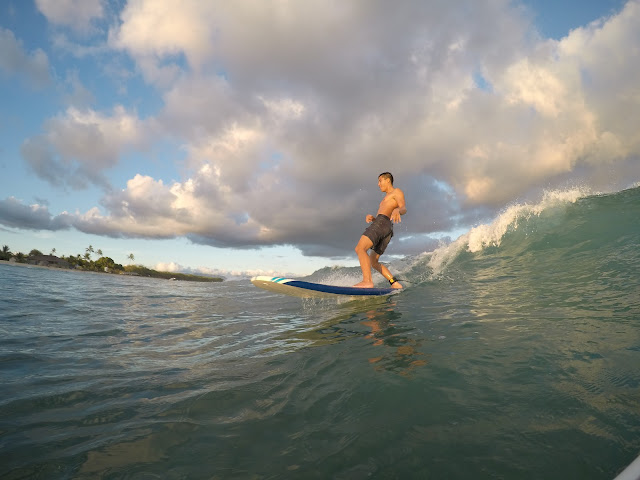 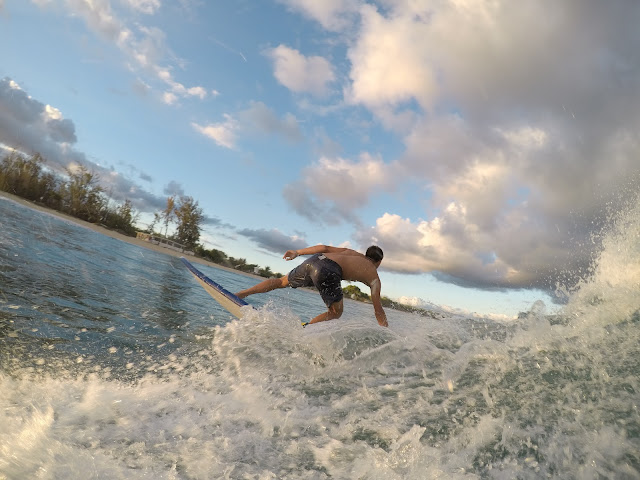 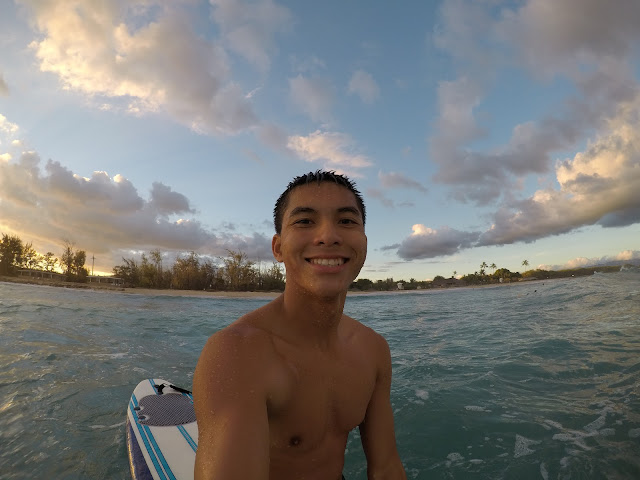 I caught some good ones, but I felt off today (I didn't get much sleep last night).  I was batting 50 again.  It was still good to get in the water!

I think these last two sessions marked another milestone for me.  This past Sunday, I was going to setup the Gamma front wing.  I thought I read somewhere that the surf was going to be bigger and I wanted to test out a smaller wing. 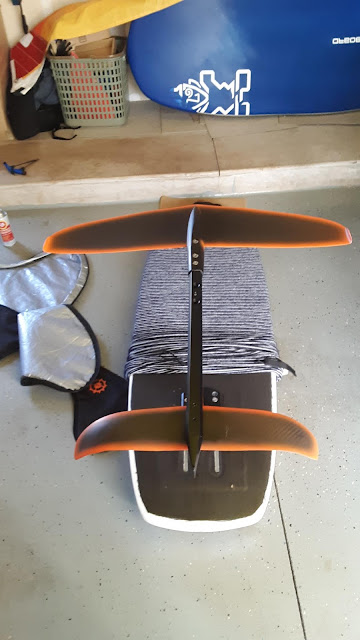 Well I checked out the report one last time before going out and decided to use the old reliable (and boy was I glad that I did).  I ended up catching five waves on a short evening session (full tide at +1.9).  Infinity 76 front wing on the 61cm mast - everything was perfect!  Long rides traveling down the line on a wave that I would have been struggling on if I had the TJ Everyday under foot. 5 of 5 - batted 100%!

Then there was this afternoon.  Same setup, with the foil moved forward just a hair of center.  Today was the first time I really did not pay attention to my foot position - and weighting back and front was more intuitive.  I caught seven and only had one bad ride (and three outside all the way to the beach rides).  On the bad rides I knew something was off just by the feedback the board and foil were giving and instead of crashing, I just rounded up hard and slipped into the wave (instead of getting thrown around like during the past several months).  Fat kitty was hanging around, and so was the peacock (who is the real White Plains mascot???) 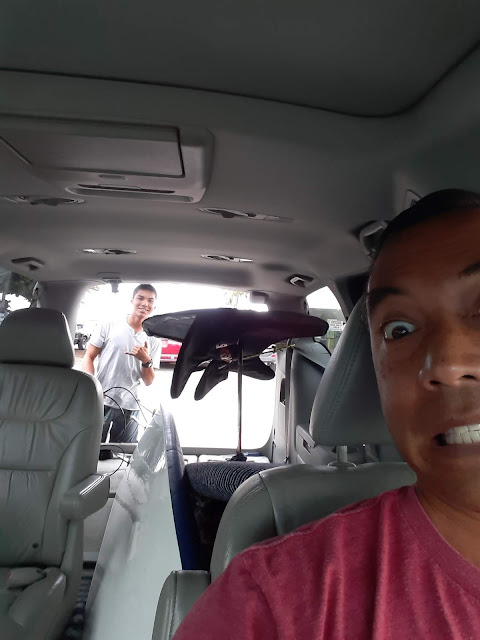 Marlon had the Wavestorm out again and was trying helicopter takeoffs (same as last Sunday also).  We could only spend an hour at the beach today but it was so worth it!  Today was a great foiling day!!!
Posted by Victor Velasco at 5/08/2019 10:56:00 PM No comments: