Marlon and I hit the beach again today (but La did not come out today, so no pictures from the beach out into the water).  I used the same setup - 5'6" Foilboard, Armstrong CF1600, same place in the track as the last adjustment from yesterday.  The waves were bigger than yesterday, and the wind was also stronger (trades are back).  The tide was peaking at 1.4' and we caught it an hour before and an hour after the peak. 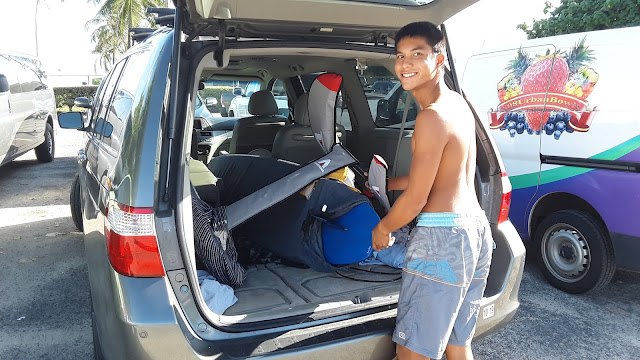 The Armstrong performed flawlessly.  I had several long rides picking up the waves from the reform and riding them all the way in to the beach.  I could feel the 'mast flex' on the turns - and I'm finding myself repositioning my feet and leaning differently to compensate. This never happened on the Go Foil or the Slingshot (as they are both way stiffer) - but flex is a good thing.  I'll just need to figure out how to use this to my advantage.

I also almost lost it on a few waves by touching down, but the foil allowed me to correct the mistakes by pumping out of the bogs and I was able to take off again.

This foil also did not breach - I felt like I was flying the foil just beneath the surface (based on how high I was up in the air) and it never dropped me (cavitation = loss of lift) once.  If this pans out to be the case every time, I'll be able to push this thing harder because I won't have to worry about surprise drops.

I tried a few takeoffs on steeper waves and  I never felt like I was going to lose it - I just popped up and applied back foot pressure and up went the foil whenever I was ready.  I'm still getting used to this - but this to me is more familar - closer to surfing takeoffs.

I'm still planning to do the swaps back and forth with the other foils I have (until they sell on Craigslist), just to keep my riding skills sharp - but the Armstrong CF1600 is a really outstanding wing.  It'll be interesting to see if riding the Armstrong changes the way I ride the others...