I went on a dawn patrol again this morning - this time of year you have to take advantage of the morning high tides when you can.  Prior to this weekend, the big high of the day was occurring in the very early morning.

Marlon came along - his big debate was whether to wear his thermal top or not.  He opted not.  I saw him catching several, but the swell was not as big today as it was yesterday - and his rides were on the shorter side.  Thigh to waist high on the sets. My first three waves were really fun, long rides.  I breached on one - steep takeoff.  I also had a few bad takeoffs - front foot too far forward or my back foot off center.  At about 7:15, the crowd showed up, including a bunch of foilers - the two SUP foilers, Dennis, Kalani and another.  I had a few more long rides - including one where I was pumping back out - not straight out but 45 degrees up - and I almost had a 2 for 1.  Marlon said he was going in - I tried catching one more but got caught in the "one last wave" slump.  Dennis told me that the screws on the foil should be tightened down hard enough to stop any flex - then the foil becomes way more predictable.  I bought some 1" PVC pipe to make a low board rack - after that I'll disassemble the foil and reassemble it and lock down all the screws.

To round it all out, there was another monk seal on the beach. 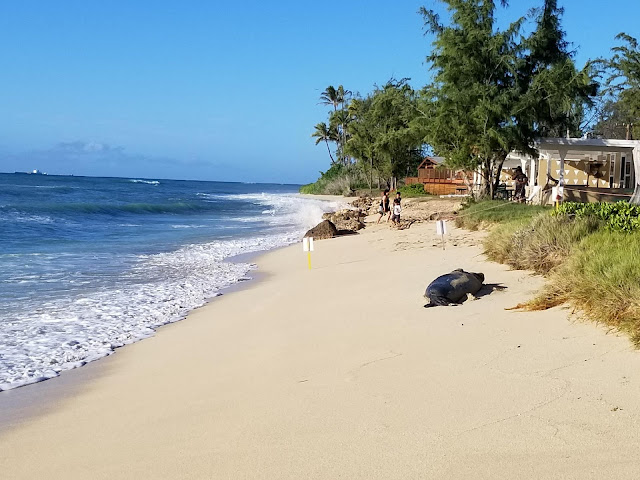