La took both kids to sailing so I figured I should get some exercise.  The report said the surf was supposed to be down (but it wasn't).  I had placed the Viking on the racks and headed out. 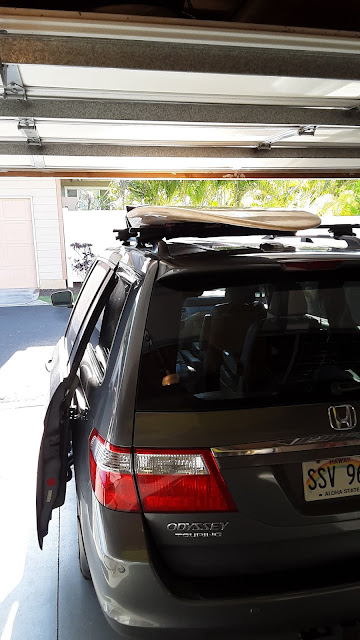 The swell was breaking on the outside and was chest high.  The wind was up - 15 to 20mph, and the tide was at the smaller high at 1.3'.  I caught a couple of handful of waves in just over an hour.  I rode several from the outside all the way in - threading the flats and maneuvering to catch the bumps.  I was thinking this board can go as long as the foil...  I did see a few of the foil guys out, but the wind was wreaking havoc on their rides.  They'd pick up the wave and could only get any distance if they went left (with the side shore wind) - turning right meant getting wind under the board and ending the ride in a wipeout.  I had a few wipeouts myself - taking off on a bigger wave requires a lot of juggling to keep the board from pearling and to also to keep on the wave (and not get blown off by the same headwind the foilers were dealing with).  I am really impressed with the versatility of the Viking.  It is a completely different ride from the TJ Everyday (nose rider + carvey longboard, versus a strict "glider" which I did not even really know about until getting this board).  I really like this board and I'm starting to figure out why there is so little visibility on the web about it (fans are surfing this board and it is letting them surf way more - so they spent a lot less time on line talking about it - plus they don't want more people buying gliders so they don't have to compete for waves).  And with that, this is likely the last time I talk about how much I love this board. 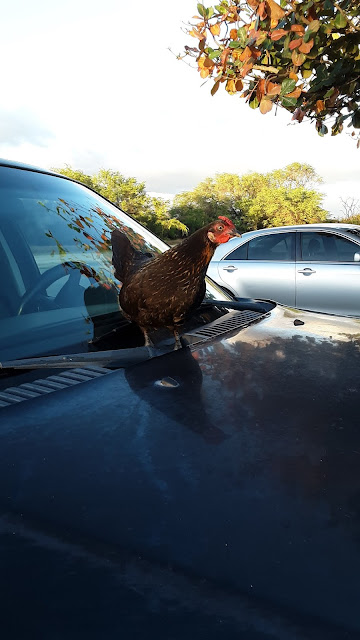 On to the next topic - White Plains has a resident chicken (Red Jungle Fowl sounds more intimidating).  And this gal viewed this SUV as hers.  When I pulled into the parking lot, it was hanging out on top of the vehicle parked in this spot - ON TOP.  Then when I was packing up, it was asleep on the windshield of this SUV.  While I was loading the board, it woke up and started looking at me (pretty annoyed too - like "can't you see I'm trying to sleep here??!!!).  Then it even started scratching the windshield wiper area like it was looking for food.  I'm glad it didn't claim the Odyssey.
Posted by Victor Velasco at 2/26/2020 09:31:00 PM