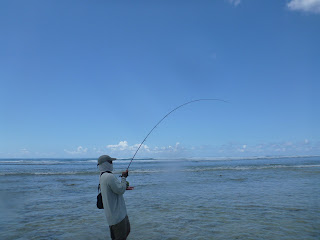 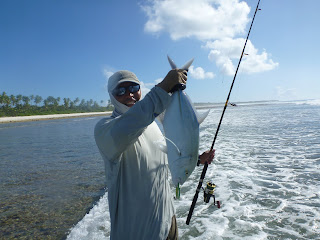 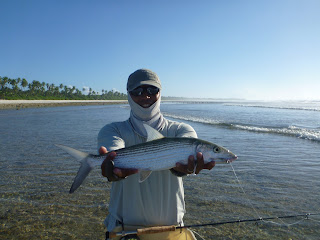 Caught 13 (plus or minus a couple) bonefish and landed one Bluefin Trevally (and lost a few others including a sizable one that trashed my furled leader).

The fly I made yesterday was killing it!!! It eventually got taken by one of the bigger bones (thigh sized, not the schoolies I've mostly been catching). I released all but the last three (I need to make more lumpia). The bigger ones were awesome to fight - taking me to the backing at least three times each fish!!! The other flies I used for the bonefish were gotchas.

Tried out the Orvis Hydros 8 wt rod that I picked up on sale a couple of months back - I'm not sure if my technique is getting better (probably), or the rod is making me look like I cast better, but whatever it is I'll take it.

I even caught a few darts towards the end of the session.