I went fly fishing after work yesterday. I had the Epic 888, Allen Kraken XLA 4, and a ROI Bonefish (long belly) 8wt line setup. I ended up hooking up with Bonefish #4 (o'io). It took a clouser minnow tied to resemble the baby goatfish swimming around (o'ama). I had the bite guard on and it still took the fly. That was probably due to the early evening low sunlight. Whatever it was, I'll take it! 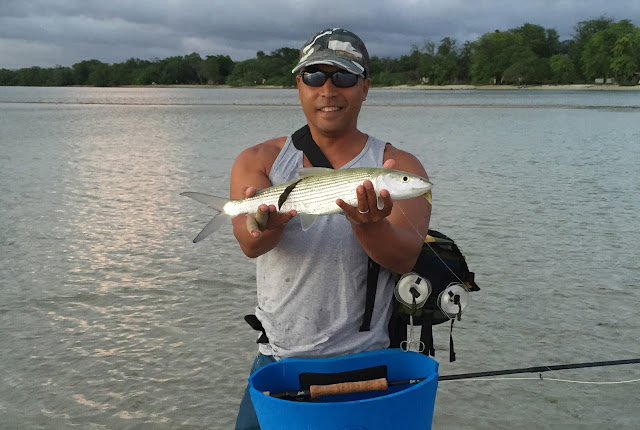 I had my tagging kit, but this fish already had a tag on it too - 14068. I scraped all the algae off so hopefully it'll have an easier time swimming. 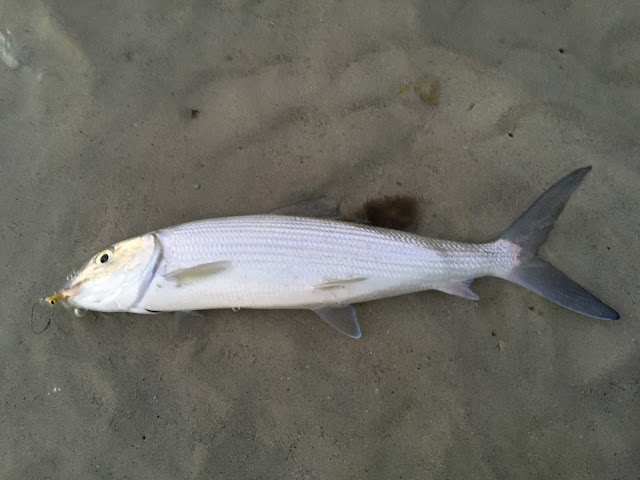 Funny how when you are trying to catch one fish, you totally catch another. I was fishing for barracuda... I did go flyfishing again this morning. I saw several large bones, but didn't draw interest from them - I bet it was the bite guard...
Posted by Victor Velasco at 9/26/2015 03:56:00 PM No comments:

On one of the fishing outings, I tied on the mylar tubing baitfish. And after three casts, I felt pressure come on, and then suddenly slack. That means only one thing - barracuda on, barracuda off after it cut through the leader. Good news - I stumbled on a fly that kaku hit without hesitating. Bad news, I didn't have any more tied up so time to do something else. Moving on - here are the reinforcements. 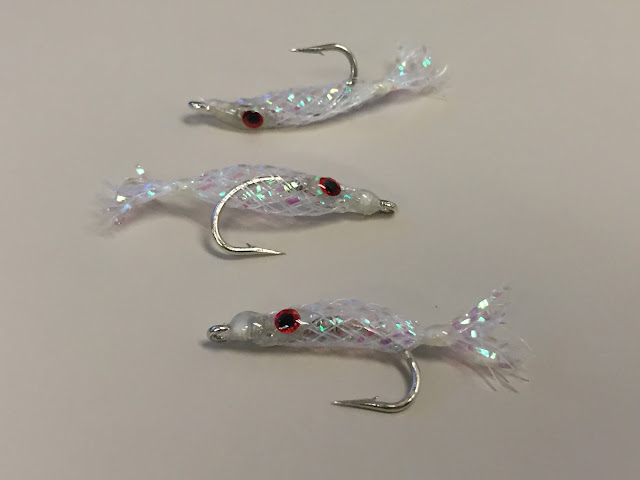 I tied these with lead wrapped around the shank to help it drop through the water column. Stripping will bring it back to the surface so these should cover more water and find more fish. To address the cutoffs, I also got some tiny snaps and swivels and wire tippet. I have been tying on flies or kastmasters for barracuda using the wire tippet and 12# fluorocarbon joined by an Albright knot. The problem with those setups is you can't change out the fly or lure. I didn't use snaps before because the ones I had were too big and not conducive to fly casting. 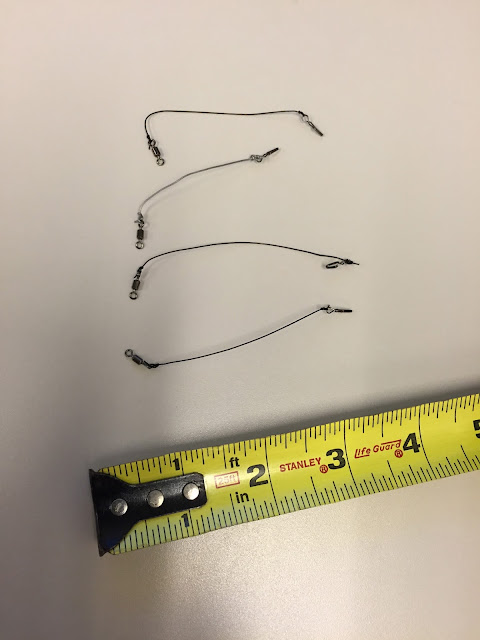 With these small bite guards and lightly weighted "kaku candy" flies, fishing this weekend should lead to some catching. I hope. More to follow... 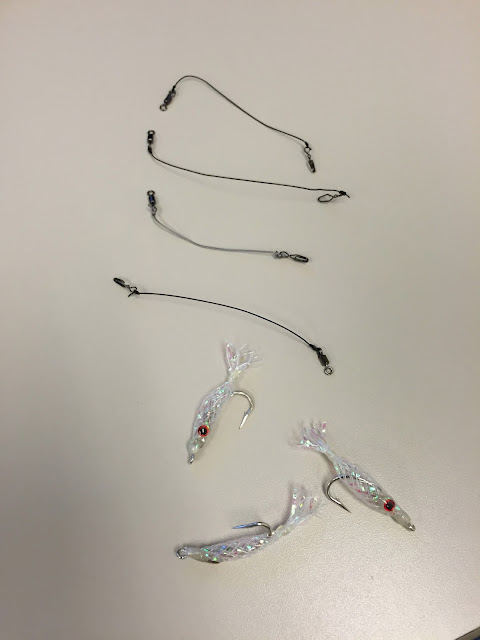 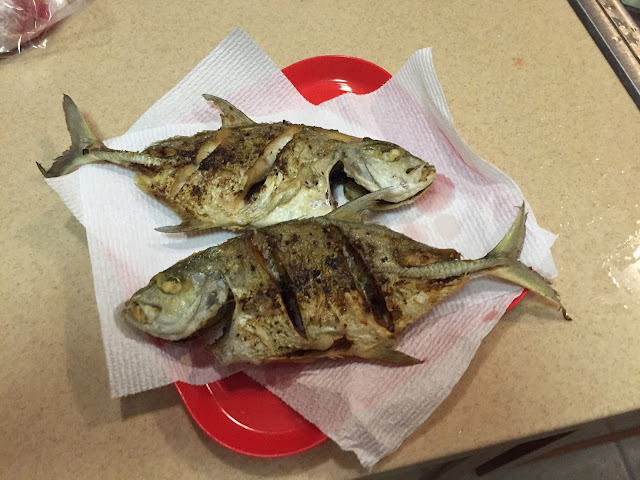 Whoa! Late posting... been trying to work paperwork for closing on a house, looking for transportation options, and making bacon at the office. Sorry for the lack of posts folks out there who care. I have gone fishing a couple of times since the last Saturday at the Holoholo, but I didn't catch anything so I went sans post. I'll start posting more since a major effort at work has subsided. Starting here - this was dinner last Sunday - the two papio I caught at the fishpond. Really delicious fried crisp with only salt and pepper as seasoning. I was thinking about making some gyotaku out of these, but I got hungry.
Posted by Victor Velasco at 9/25/2015 07:21:00 AM No comments:

Tied up with the cord braid I bought from JoAnn's back in Tacoma. 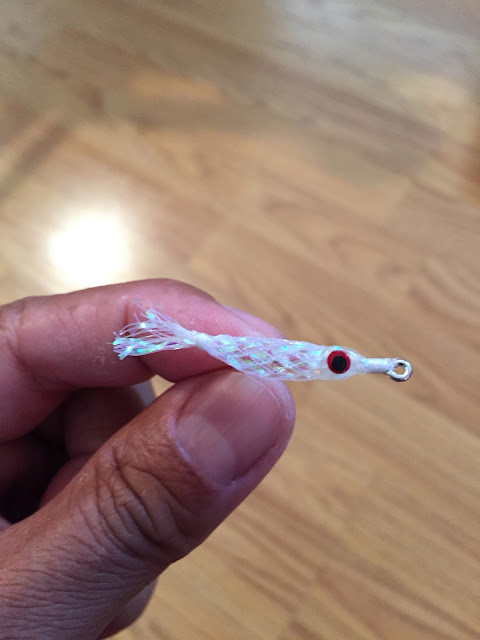 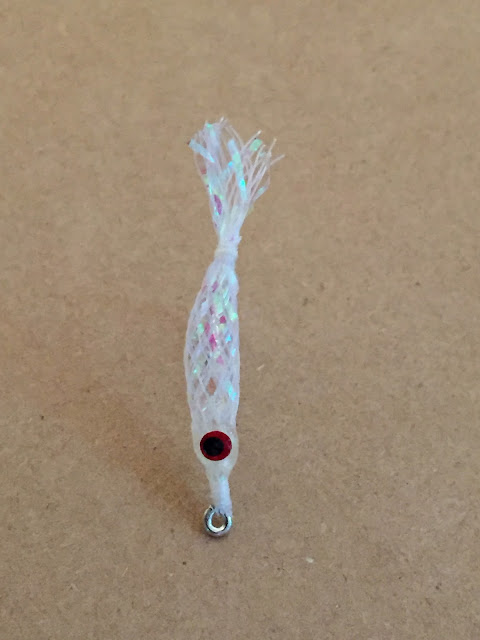 Oops - I been swamped at work and haven't been out fishing, surfing, or doing anything amphibious. But I did go and volunteer some time at the Fish Pond helping out. 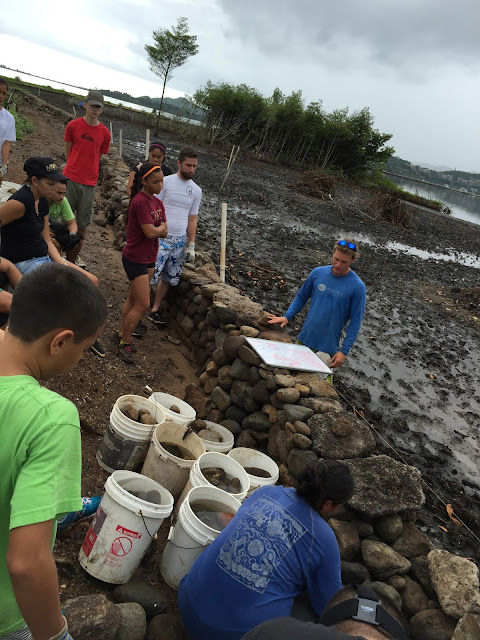 Last Saturday I went to the Community Volunteer Day. We moved rocks, more rocks and some rocks. Then we got to start placing rocks. Way harder than it looks. Lots of constructive criticism - hopefully next time I can do a better job... Nonetheless, I couldn't stay for the after work session kalua pig - had to get to work. Today was the last of this year's Holo holo (predator eradication days). I got two papio to hand, lost a third and had a kaku staring at me the whole laughing at my lures. 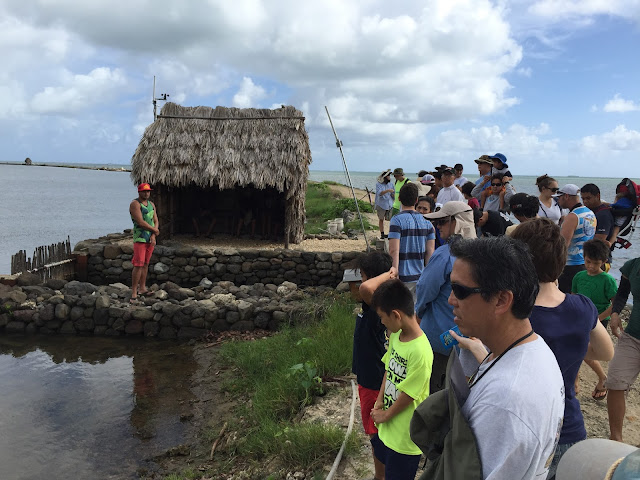 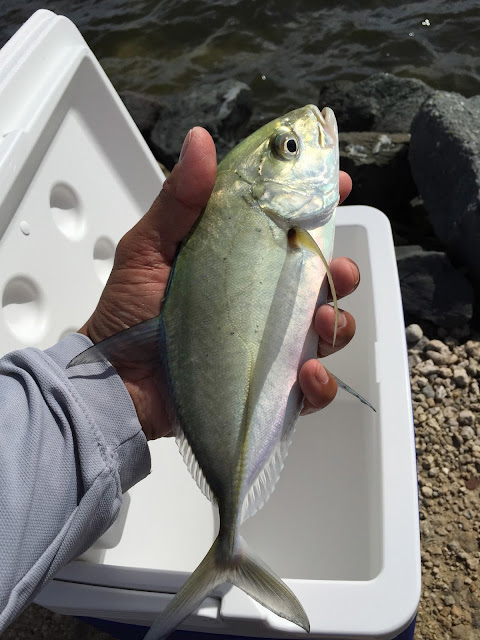 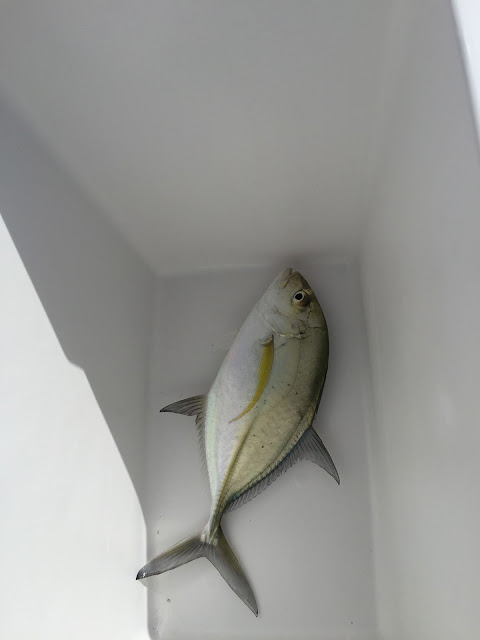 The catching slowed down towards noon so I started packing up. But not before taking a closer look at what all is really in the pond when the water is up. Crabs of all sorts and a species of shrimp (opa'e). 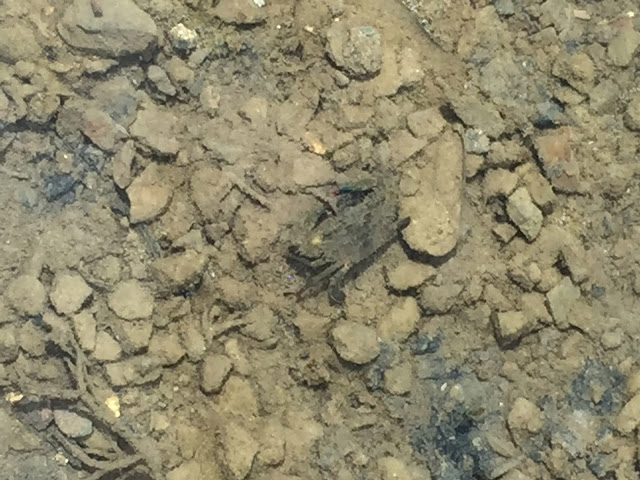 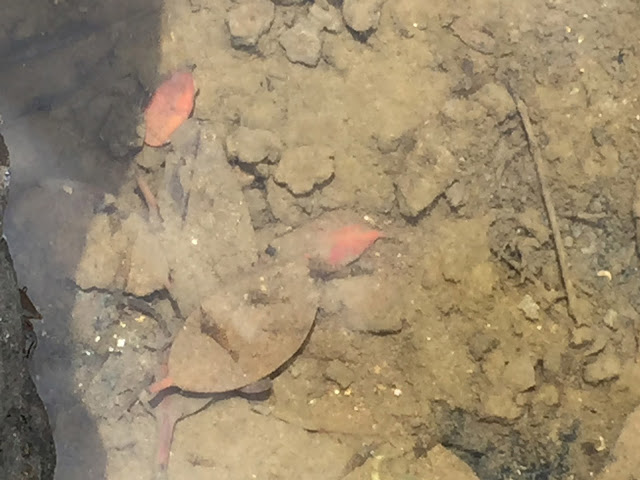 White Plains Beach at Kalaeloa. 10 - 15 foot faces on the outside. I think I have found the limit that the ULI GLX2 can handle. Between the air blowing up the face and this swell pushing faster waves, I had a harder time making the drop. On the outside break just to west, the barrels were way overhead. I also know there are more sharks there. With no locals surfing that spot, I'd say we were all thinking the same thing (better safe than sorry). 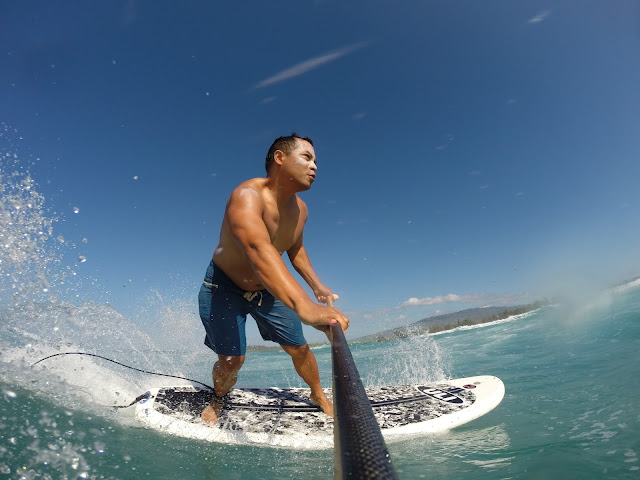 Last few times I've been in the sun, I've been torched. I caked on the sunscreen and even used some brown/tan Zinka on my face and shoulders. Smelled just like surfwax - ahhhhhhh! 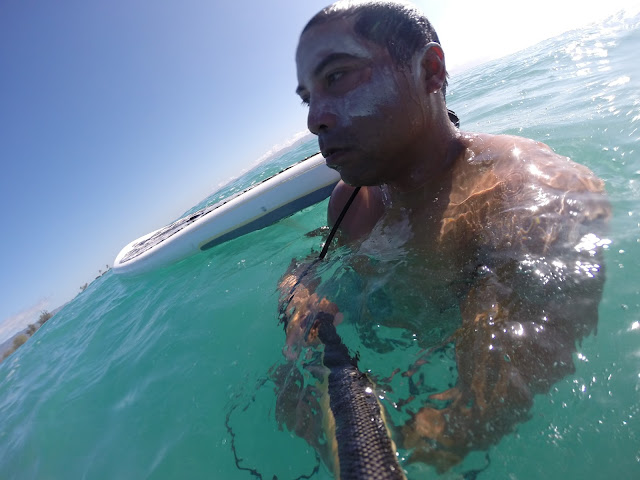 After a few on the outside, I paddled to the second reef break and surfed the more mellow 6 footers. Checkout the small water droplets on this picture - miniature globes!!! 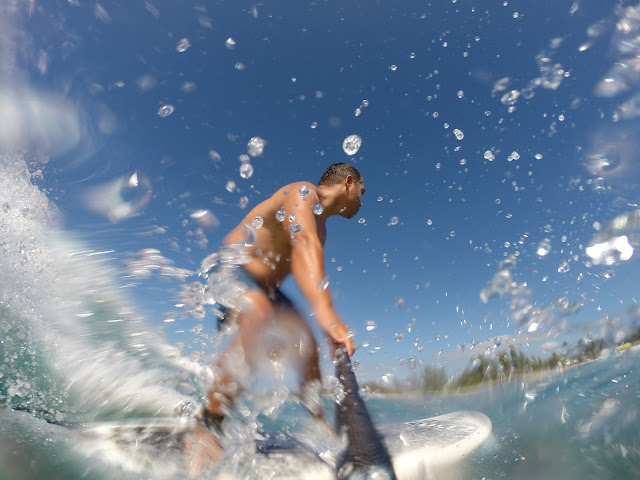 I went fly fishing on Friday, Saturday and Sunday afternoons and got skunked the either weekend. I did force myself to use a different setup than I have been - Epic 888 with a RIO Bonefish WF8F line on the Kraken 4 XLA. By moving to a fiberglass rod and longer belly line, I am practicing casting by 'feel' more. It took a bit, but by the end of the ultra-skunking I felt I could get more line out further than when I first started playing with this combo. Changing the line out especially helped. What didn't help was getting refusals when I know the fish was near the fly. 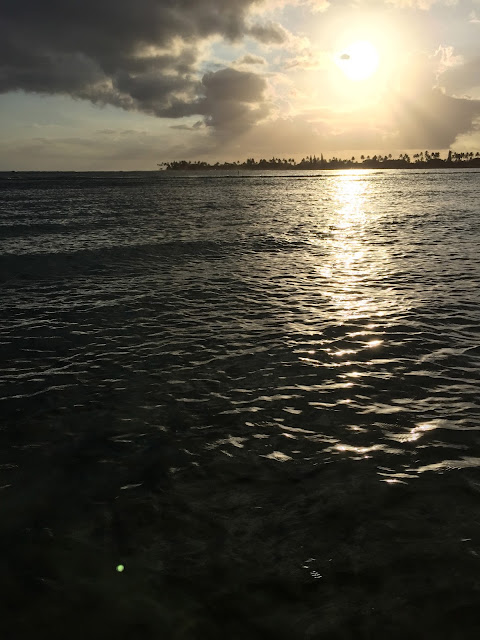 I did see a lot of aquatic life. Multiple snowflake eels, a bunch of humuhumunukunukuapua'a, a spotted eagle ray, a several bonefish. And on Saturday, I did catch something - this plastic jug went floating by and I cast the fly to it - good shooting if I do say so myself! And it did offer a 'fight' as I was trying to pull it through the current. 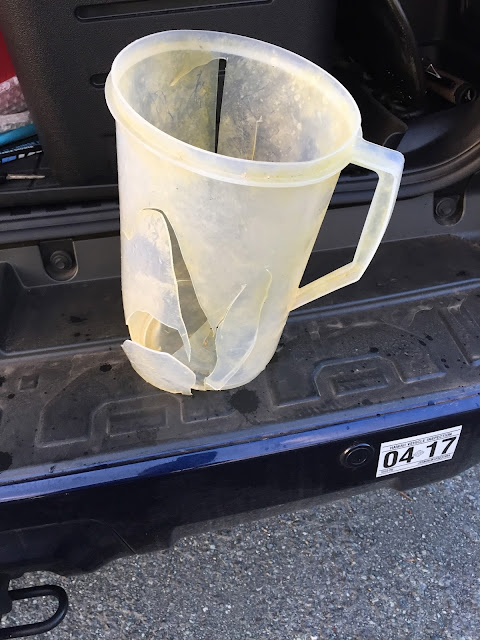 Oddly enough I didn't see any papio being caught. I think the water is actually warmer then the fish like. Maybe they have swam off to deeper water or places with more water exchange on the tides. Among all the 'looking' I did find this tiny crab in some dead coral - acropora crab species. 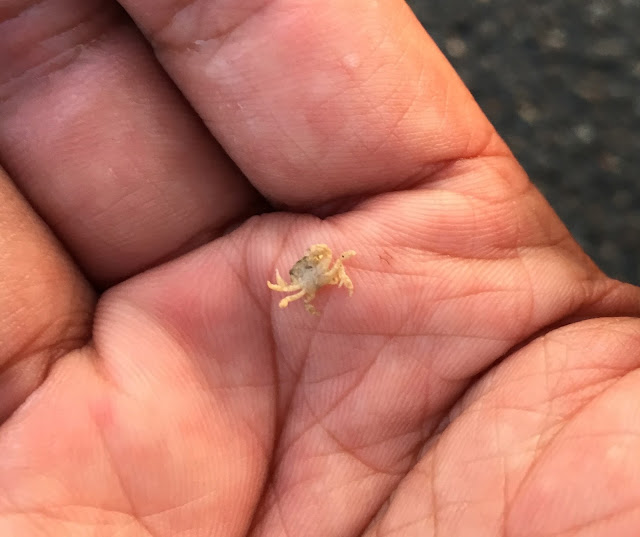 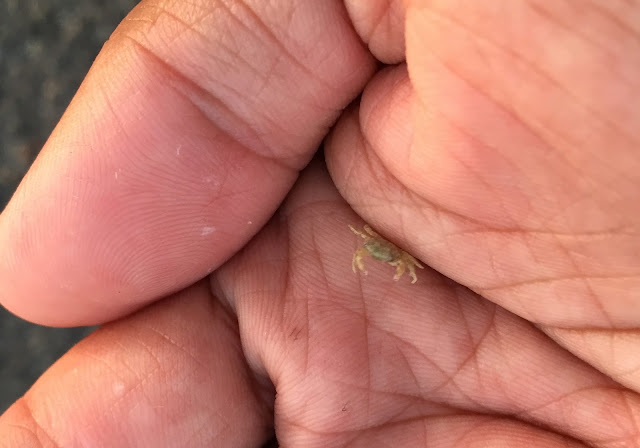 I'm going to tie a few more different flies to see if I can the fish to take - three days is a long time to not play tug-o-war... Good thing I like practicing my casts, or this weekend would have been a bust. Oh - one last thing, I found this at one of the local fishing supply shops (McCully Bike - they offer 10% military discounts so I picked it up). It works great!!! Now I can start fishing even more off the beaten path spots and not have to worry about my OCD and keeping the 4Runner clean! 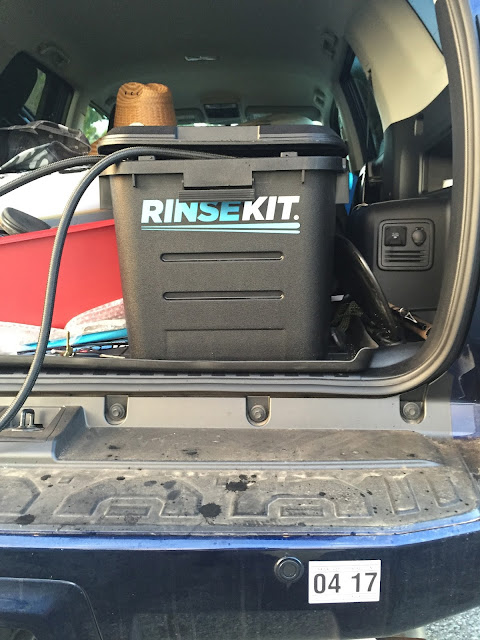