More Kiting Pictures because it was that much fun! 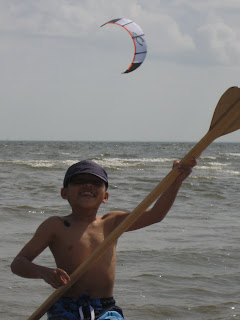 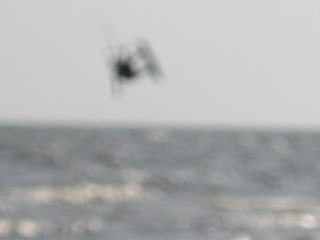 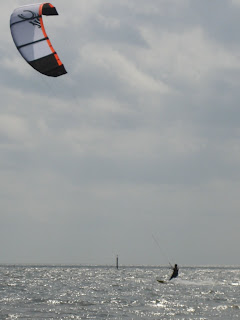 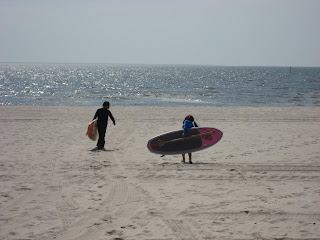 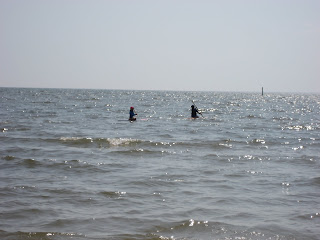 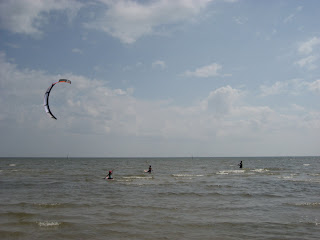 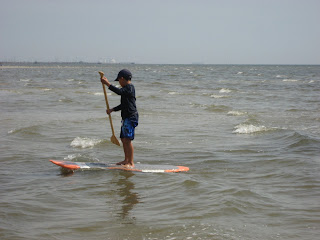 The kids asked to go SUPing again - how could I say no?

They are getting very confident with their skills now and even Noe is starting to stand up and paddle (E Ku I Luna A Hoe!!!!)

They readily shoot out for any reason (especially to say 'hi' to Dad flying by on a kiteboard) and would take turns riding the 6" surf back in.

The funniest thing that happened today? Noe carrying her board to the beach and when she got to the water she didn't even turn around - she kept on going and said 'bye-bye Daddy'
Posted by Victor Velasco at 2/27/2011 06:21:00 PM No comments: 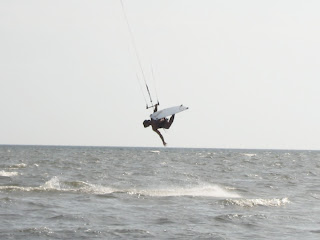 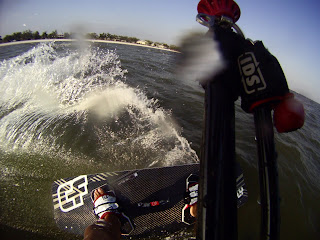 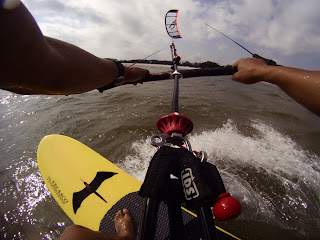 The wind and my timing converged today -

Usually I see the wind from my office window, and I have to keep on working. Or - I'm not working and the wind is not up. This problem was compounded by the fact I had a 2011 Cabrihna 16m^2 Crossbow, a 2011 CrazyFly Raptor and a recently finished lightwind kiteboard all sitting in the garage staring at me and planting images of perfect conditions and me ripping the heck out of the water with these tools...

Ahhh to go to me happy place...

No need to daydream today - right at 1300 the wind jumped from 8 mph to 11 mph and with that, La launched me and with barely a whitecap in the water (see the picture with the board I made in use - smooth water) I was cruising! The big Crossbow was incredible!!!!

I rotated out the boards and the CrazyFly Raptor was also a winner! The combination of the Raptor, the Crossbow and the wind (by that time 13-16 mph) made for some wicked high jumps - nothing crazy - 12' vertical with 20' across ground.

We stayed most of the day at the beach - I haven't been this sunburnt or this sore for months!!!! 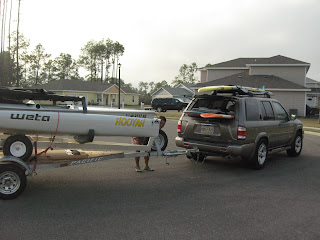 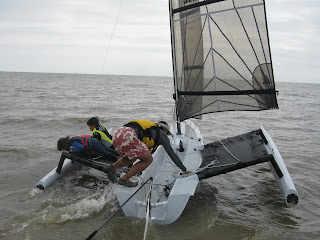 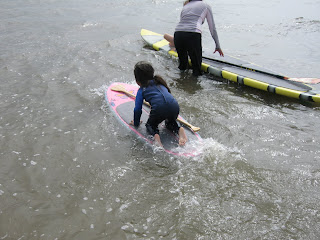 The forecast for yesterday called for marginal kiting winds so I hooked the boat up. I started telling the kids that we were going sailing and they asked to SUP instead.

I told them that they were going to go sailing and that they would like it - but that I would also bring out their SUPs and they could have fun with them too.

We ended up going to Henderson Point (last spot of land before crossing the Bay of St Louis Bridge here in Southern Mississippi).

Getting the boat down to beach level from the road was not too bad (swung the ramps over) but the drop height looked to be challenging for the return trip.

We got the boat rigged and I took the kids out for a run - 10.7 mph under jib and main alone.

From there, I did another 3 runs shuttling friends back and forth. The wind backed down for the second run, but slowly picked up for the third and forth runs. I used the screacher on the last three runs and by the last run with La, we hit 13.7 mph - there were barely whitecaps on the water.

Meanwhile, the kids on the beach were all over the place on their SUPs. Put them in wetsuits and their fear goes away - they were way offshore at times just buzzing around.

The Wind that was not to be 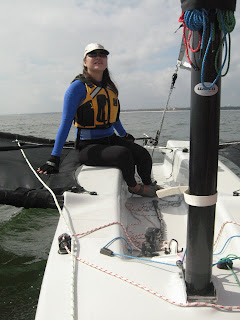 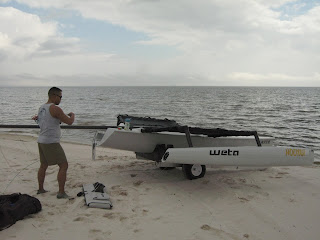 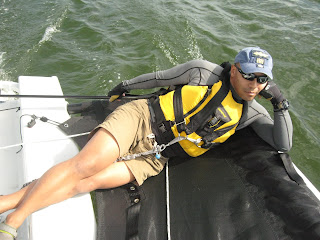 Between work, La running half marathons and just the general lack of wind, we haven't been out to the beach much. Sure the weather has been wonderful (60s to even low 70s), but without surf or wind, the idea of going to the beach just hasn't sunk in.

Also, with limited time left in my hands before we have to pick up and move again, I have been trying to knock out all the board projects I have in the garage (but that is for another post).

Well that nonsense of not going to the beach ended Sunday. We got up and went to the beach. Not really enough wind to make it thrilling - or even worth setting up the sail for - I ended up bulldozing in the tent. And actually, the extra sleep was well appreciated.

And it really ended on Monday - President's Day - the day that we take to remember the 42 other birthdays of those who have led this country - but more importantly, the weekend La and I got married 10 years ago (eloped - Vegas - but that's yet another story).

Back to the topic at hand - beach, no more nonsense, blah blah blah...

So - 2.5 hours before we have to pick up the kids, I pondered over a dubious wind forecast and declare to La "Let's go sailing - I don't see the wind picking up to forecasted strength and I'm pretty sure I'll get skunked if I try to bring the kites". From the pictures it's obvious we went.

Well - not only did the wind not pick up to the forecasted 15 mph, we were lucky in some instances to be even moving (lots of holes in the wind field). We did get into some breezes and topped out at 9.6 mph - averaged out to 4.0 mph.

We had the screecher out on the outbound leg, tacked with all three sails up and got it furled away nicely on the way back in. 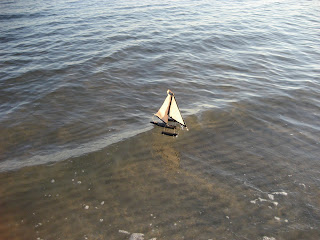 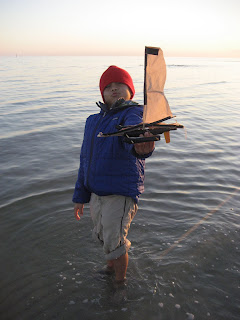 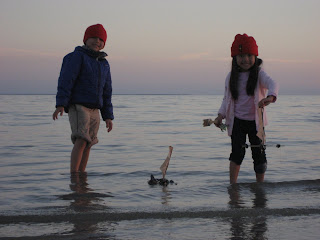 Took the small boats out today -

I jumped on the 11'2" and paddled the boats out to a suitable drop off point so the kids could watch them sail in.

They made it and they were pretty stable. Still not enough forward buoyancy.

And between the proas and the trimarans, the proas actually sailed better... I think it is the sail positioning, but BLAH - no more tweaking, more sailing!

53 F temps and very light winds we're enough to get the kids in the water. Nice day!

On another note, I did get the deckpad on the kiteboard - it's actually looking awesome now! The only thing totally stopping me from getting it wet is the lack of wind. And the lack of a logo. I've got one tee'd up, just need to breakout the Posca pens and the rice paper. Stay tuned for that.
Posted by Victor Velasco at 2/06/2011 05:19:00 PM No comments: