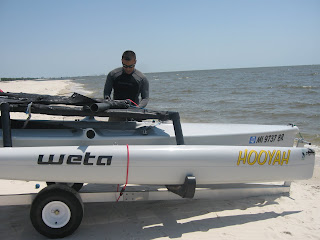 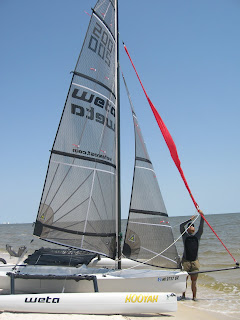 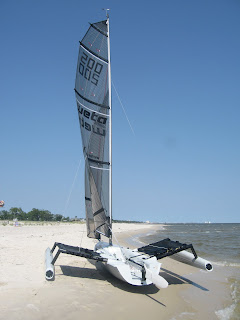 In addition to breaking in La's SUP, I dragged the Weta out to the beach. We picked the boat ramp just East of the Walmart in Pass Christian - it offered a shorter run to the water and deeper water with the tide.

I made three separate runs on Sunday - the first two were solo with 13.8 mph being the fastest I got (out of 13-18 mph gusty winds). I had all three sails up and out - but the reacher didn't unfurl all the way. At the end of the first run, I went back in and reworked the reacher furl (I can't win with this sail).

I tried to bribe the kids to go out on the second run, but they weren't having anything to do with the boat - more interested in building a sand "water park". That's okay too... so the second run was solo. 13.8 was the most I could get the second time around. Russ Seignious with Lauren, Mike and Max stopped by the beach. I told them they needed to go home and change into beach clothes and come back. Low and behold - they did.

I had already taken down the jib and I heard La saying "they're here!" Up went the jib and off Me, Russ, Max and Mike went to the horizon. We got 15.8 out of the wind and one of his kids would always be on the leeward tramp (getting sprayed hard from the side-on waves that were being torn apart. Nearly capsized the boat once, but got the weight properly again.

This was our last day on the water down here in Southern Mississippi. We will miss this place for the secluded beaches, the mellow traffic and the short commute to the beach. You could not have paid money for the beautiful weather!
Posted by Victor Velasco at 4/19/2011 04:19:00 PM No comments:

And the first paddle out 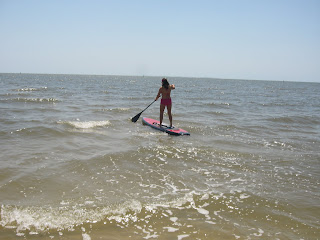 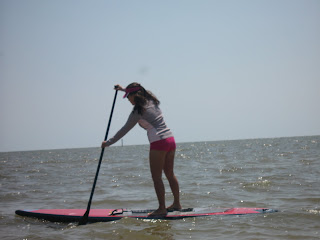 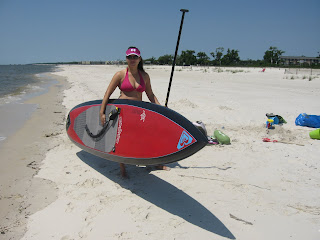 It was a hair windy (in fact I was flying on the Weta, but that's another post) for SUPing, but we brought the board I just finished for La.

Initial feedback is she likes it - lighter than the Infinity, paddles faster (lighter glass job), and is really stable (despite the thinner width).

Hopefully there will be a windless day here in the near future for her to test it out in it's design element (flatwater).
Posted by Victor Velasco at 4/17/2011 04:01:00 PM No comments: 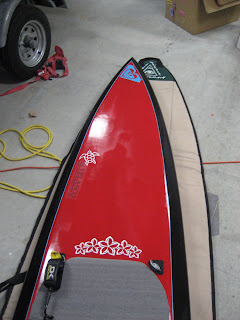 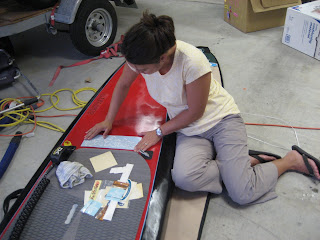 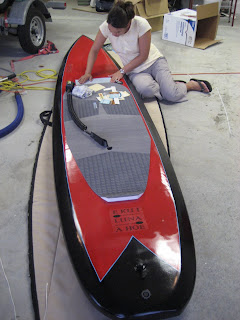 A board is not "your" board until you've put stickers on it.

I finished La's new SUP last week and we finally got a moment between the packers boxing up the house, work still pounding me and school work for the kids. 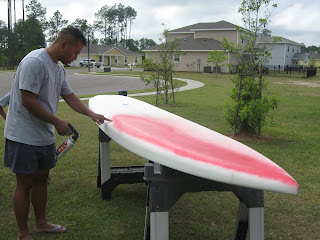 Wind was bad this afternoon so I could not finish the paint job.

The board is actually much further done that what's in the picture (taken on Sunday).

I've got two leash cups, a gortex vent and an inlaid handle all installed. 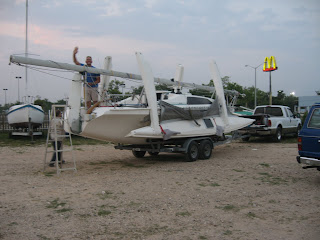 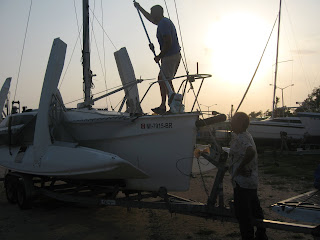 Roger, Stan and I dropped the mast today on Roger's boat. He's taking it to Mobile, AL to get the transome fixed and to get some other "go-fasts" finished up on it.

After 18 months of being crew aboard, it was neat to finish off the way I started -

I first noticed Roger's boat parked at the Long Beach Yacht Club and when one of the first Hurricanes pulled through during our stay here, he dropped the mast and pulled the boat to higher ground.

When he brought it back to the club, I asked if I could help and that was that.

Several races and trips out to the barrier islands later and it's time for the Velasco's to move on to the next spot. 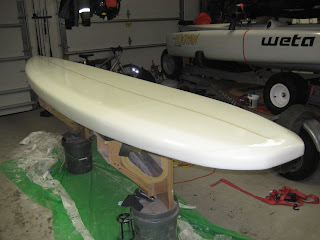 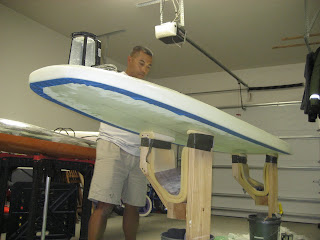 Hot coat applied this morning after several minutes of grinding the laps down.

This is the longest board I've ever built, but the fun thing is it's the one that is progressing the fastest.

When we hit the errand running circuit today, we'll pick out some paint and by Wednesday this thing should be in the water.

I already measured out the finbox spot and I lined up the vent and leash cups. Tonight I'll set the finbox and hot coat the bottom deck.

3 hours of work with 3 separate epoxy pours - lots of work but the lam was perfect!!!

The nose has significant glass to protect it from La's rough-ish handling - but overall it's still very light, especially when compared to the Infinity we had.
Posted by Victor Velasco at 4/09/2011 06:17:00 AM No comments: 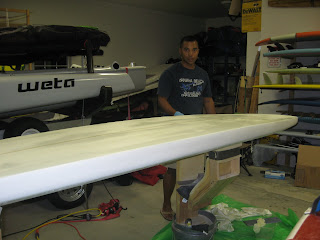 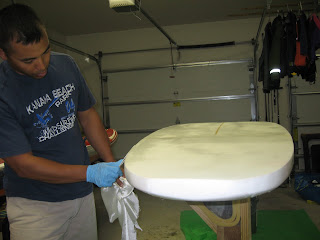 One of my better lam jobs.

Tomorrow is fill and sand.

Sunday is finbox(s) - may go twinzer on this one - smaller fins but more resistance to lateral motion.

Packers will be here on the 15th. This board has to be done before then... 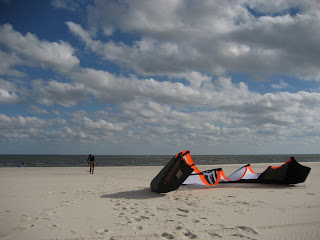 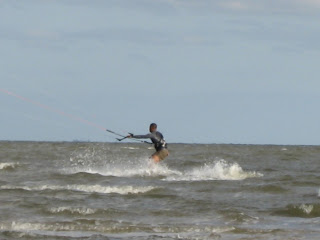 The wind was pushing ALL DAY - except when I got to the beach - the NOAA anemometer at Gulfport Harbor read 9 - 17 during the period I was out, but I think I had less at the Pink House Beach. I think I had 8 - 12.

Crossbow 16, Wide and Flat Yellow board and away I go!!! 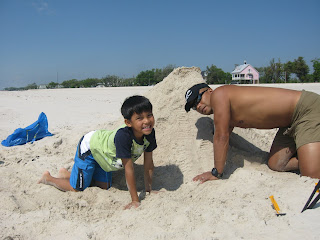 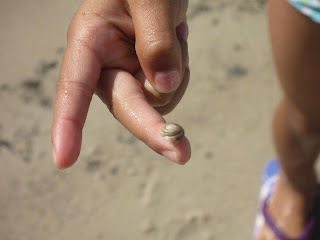 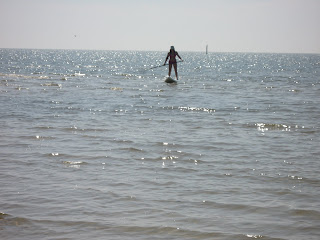 Another day relaxing on the beach...

Life is going to change pretty quickly for the Velasco family... 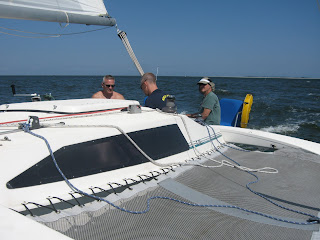 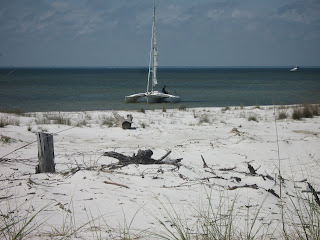 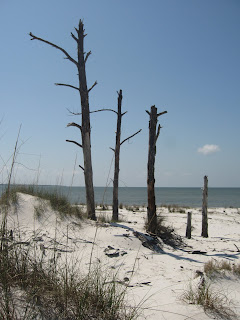 Sunday the wind was supposed to hit 25 (in the gusts) - but the forecast Sunday morning had the winds lower than 20.

Roger, myself, Bill (Whitmire) and Stan-O (Wiles) went out around 1145 and the wind was a solid 15 mph. The engine choked up pulling out of the dock - we had just gone over a drill to throw out the anchor if something like that happened - self fulfilling prophecy???

The beaches were relatively clean (no visible oil) and the weather was as nice as it could be.

Not so good backing down from Cat - prop dug and popped the transom - fiberglass repair time.