With the loss of my two workhorse rods (I'll say it again - some bastard stole my Epic 686 and the St Croix Tidemaster from my truck), I'm having to use other rods (which is ok - I needed to use the others) to fish. Even though it was way overkill, I rigged up the TFO Mangrove 9wt. Lots of rod just to fish for needlefish. The cork filler started to crumble - I'll have to get used to the voids left (right where I put my thumb and index fingers... - the old adage "you get what you pay for" proves itself again). I'll still cast this rod - I'm sure it'll grow on me. I think this rod wants a heavier line (like a 10wt). I'll try it again soon with an added sink tip extension to see if that perks up the casting. 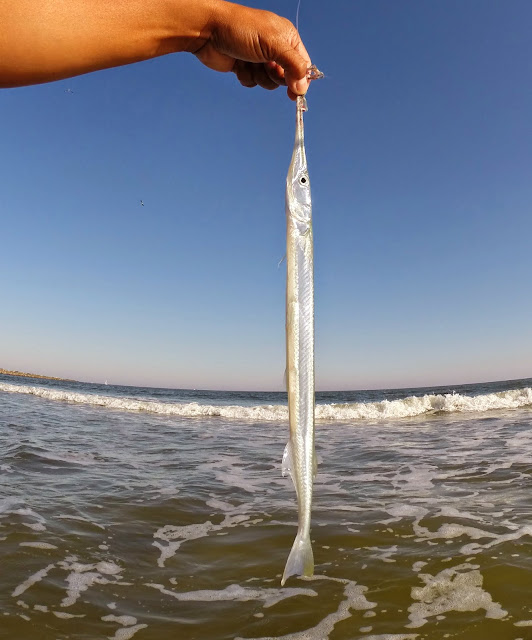 This fish took the Bloody Guts fly and was jumping a bit - enough to attract an observant osprey. The bird picked up the needlefish while it was entangled in the fly, and started to make off with it. It didn't get far before the line went tight and the needlefish slipped from it's grasp. That doesn't happen everyday.... I also saw a few other fish (maybe slot reds) rolling in the shallow surf, and stepped on a couple of fleshy (and angry) fish - maybe a flounder??? Nice day in the surf flyfishing!
Posted by Victor Velasco at 10/26/2014 03:37:00 PM