First Outing with the New Starboard

I was feeling a little better this afternoon (I have been fighting a cold/flu) so I took Marlon out surfing.  I brought the new Starboard to get a sense of how it works.  Marlon caught a bunch of waves. 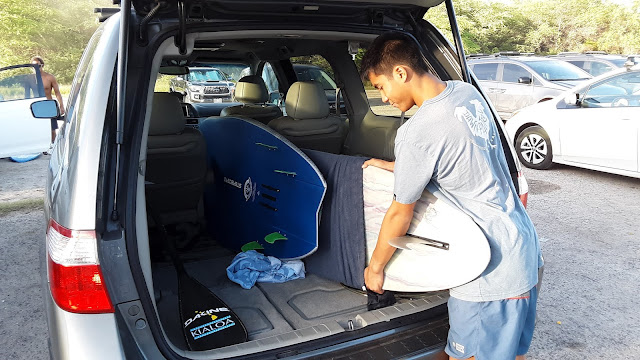 I took the board out to the western part of the beach. I could paddle it but it is way less stable than I thought it would be - but by the end of the session I felt a little better on it.  There is freeboard (at 106L it is more than capable of floating my 88L butt) but I started out trying to paddle standing up - big mistake - this is the smallest SUP board I've ever paddled by a long shot.  The sweet spot is super small - any deviation from it and you go over.  I decided to catch a few waves prone and then standing up (but managing a paddle in between) - the board surfs really well.  Then I tried catching a wave from my knees - and tried again.  Correlating the SUP Foilers I've seen on tiny boards with what I experienced today, I am convinced the foil hanging off the board provides the stability of a giant keel.  I originally planned to get proficient at SUPing this board first before trying out the other aspects, but now I'm thinking I need to jump straight to SUP foiling it to confirm the added stability.  If I'm wrong there, I'm going to need to diet and start running again to lose 20 pounds.... Time to get the foil on the board.... It is good to be a newbie again
Posted by Victor Velasco at 11/25/2018 10:27:00 PM