I finally took out the Go Foil Iwa with the sawed off Maliko tail.  The cutdown tip to tip length of Maliko tail is almost as wide as the Kai tail, but the chord is the original width - so this tail will give more lift. 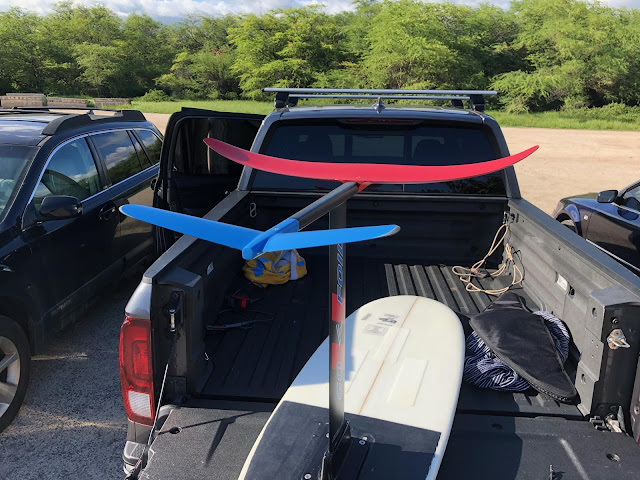 I ended up paddling in twice to change the foil position.  The first setting was back of the normal Iwa setting I use.  I caught a couple, but the foil didn't feel alive.  The after the first adjustment, I had too much lift - I had the foil set a cm ahead of the normal setting.  The second adjustment got it closer, but I felt like I had to put a little more front foot pressure (but duh - "more lift").  I'll pull it back a hair more next time.

The benefit of the change up was I felt like I did not have to pump as much.  And when I did pump, it felt like I was getting something out of it.  I even got my first legitimate 2 for 1 (well I got out to a second wave and botched the turn - I was just stoked to get this far).

I'm going to keep using this setup until the swell picks up - the kai feels more consistent, but in smaller surf this cutdown Maliko feels better on the wave.  It does vibrate so I'll probably try to fair it in after a few more sessions.