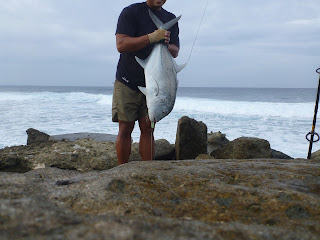 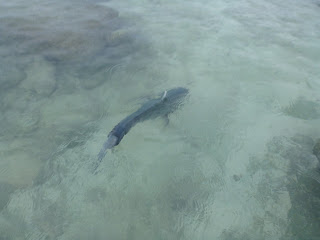 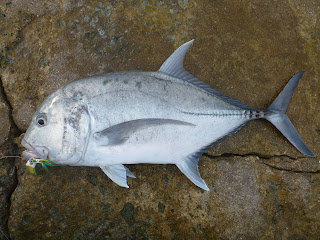 So I let the omilu go, and a few casts later, this bruiser hits that same lure!!!

He took the line and ran with it - around a concrete divider, making me go over a bunch of revetment rocks to keep the fish free and clear.

It then tried to run back down the dropoff, but I got it to turn.

A few minutes later and I had it up.

Without a scale, I guess it was a 15 pounder. I found a pool of water and revived it after the fight. I figured "since I let that omilu go and I caught this ulua, if I let this ulua go, I should hook up with a much bigger one...." With the tide draining out to a .5m low, that was not to be. I took the remaining time I had and walked the extremely low tide exposed beach and scored a bunch of seaglass.

I did let this one go also - seemed very appreciative (I guess any living thing would if it was let go from the clutches of death). From this point forward, if the fish isn't injured critically, I'll likely let it go (not that I haven't been doing that already, I'm just codifying the practice).

Awesome fight - awesome lure!!! I couldn't have asked for a better reintroduction to fishing day! Hopefully, Karma will pay out based on today's results.