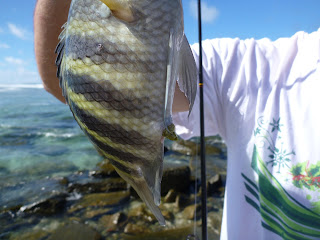 One of my fishing partners Steve-O.

After getting the cold shoulder from the Bluefin Trevallies running the inside track, I suggested he try using bait.

He switched and brought in some pugnacious Sergeant Majors.

Every one of these guys would fight to the point where they were lifted from the water. At this point one would think they their goose was cooked and it's all over. But no - these guys are just beginning the fight!!!

No other fish I regularly catch does this - the picture is the fish poo bomb - while the unsuspecting angler is removing the hook to throw this fish back (I've never eaten one, but I imagine it would have a strong "fishy" taste, not in high demand as sashimi), it is crapping all over your hands.

I'd say this fish gets the last laugh.

So there it is - if you slow down enough to take the time to look at the details no matter what is in front of you, even something as "unsporting" or "un-glamorous" as catching small fish can be the most entertaining thing you've done all day.