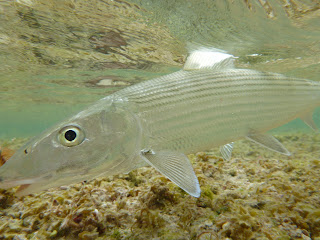 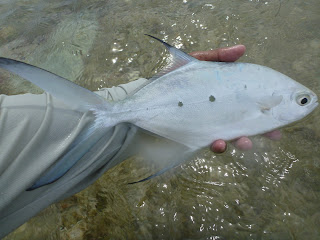 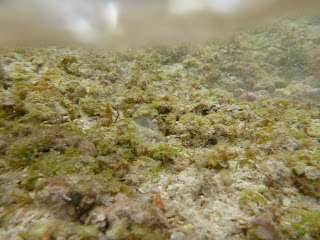 Flyfishing in the morning. Caught three schoolie bones, this huge Dart, a pinfish, a two-bar goatfish, and I hooked (and lost) a big Bluefin Trevally - more on that in a second. I caught most of the fish on an Orvis "Meko Special". I am going to start compressing the barbs on the flies I use to make releasing easier. So about the BFT. It was actually the first fish I hooked - I started off with a gummy minnow on the line. I found the magic spot where I normally fish (it was harder to recognize because the tide was not as low). Within a few seconds of wading out, I saw a blue flash - I cast the fly on a short roll cast and it hit it hard. Learning from the last few times I was in this situation, I let the fish take more line than not. It took me around two rocks and drug me out to water that was deeper. I wrestled that fish for 15 minutes and after another rock wrapping, it finally broke me off. The scream that I let go could probably be heard back stateside. 20# test was what that fish broke off - even though I lost, it was an epic battle and I'm getting closer to winning. That Dart was the biggest I've hooked up - it fought almost as hard a decent sized bonefish. All in all - a great day of fishing - hard, and slow between hits, but still great!
Posted by Victor Velasco at 4/22/2012 05:01:00 AM