This weekend La and I got a lot of work done on our backyard project.  Yesterday I got the crossbeams cut for the deck, then we went to Geobunga and bought a bunch of paver stones, and we dug up the middle section of the yard to prepare it for the rock/pebble installation.  Today we got a bunch of sand bags to settle in the landscaping rocks and we pretty much took a huge leap forward in getting this project done.  I'll post pictures of the project - we've got about a 1/4 of the middle section to cover up yet (ran out of weed barrier).  This is relevant for two reasons - first we hung up an old Laser sail that La had laying around for material for bags.

When this deck gets finished, I'll have a place to do foil and board maintenance - I can't wait (but it'll be after this coming payday - need to buy the planks and the screw gun).

Second was after getting all sweaty and nasty, I took Marlon out for another late afternoon surf.  We brought out the same gear as yesterday, but the swell dropped a notch in size (which was fine by me on the foil). 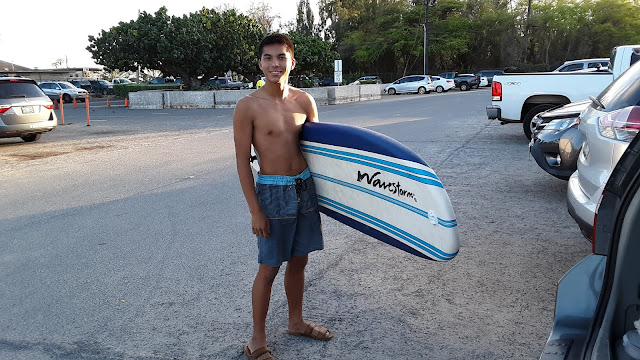 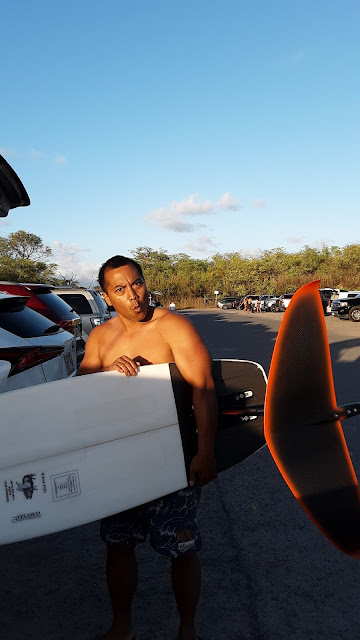 We were out for only an hour - I caught several but two of them were really long and I was definitely turning and riding up and down the bump.  Wave selection is everything - pick the right wave that isn't going to give you too steep a drop , but is still just about to break and the ride will be long and super fun.  Pick the wave that does have that steep drop and keeping the foil from breaching will be your only priority (which you'll likely to fail since you are moving too fast).  There were a few other foilers out at the break - one was recycling two or even three waves - looked like he was on an Iwa and a cut down Firewire Sweet or Baked Potato (whichever has the least tail rocker because there wasn't any on his board).   Marlon was catching a bunch - don't underestimate those Wavestorms!  Great weekend!!!