Marlon and I surfed/foiled for a bit this morning after 9am.  The wind was up and the surface was choppy - but we had a good time despite the conditions.  The tide was coming down from a high of 2.0' and the swell was consistently belly high.  I had the 5'6" and the Armstrong 1600 out (same setup as the last session).

I was able to get a bunch of long rides.  But I did have some issues - I breached the foil on a straight run (first time that happened); I dumped on a turn (breached while turning); and I had a few botched takeoffs.  I was trying to get some green wave takeoffs so that explains the last issue.  As for the other two, I'll attribute those to getting used to the foil. 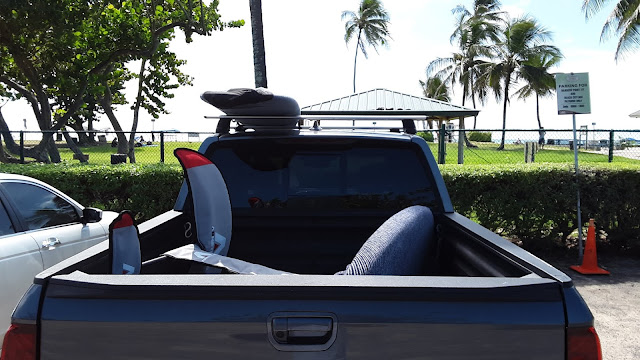 Marlon went in before I did - the conditions were making it harder to get epic rides.  Had to do the grocery run so I called it around 10:30.  All the other foilers were mostly in by the time we paddled out.  Tomorrow we'll hit it earlier.
Posted by Victor Velasco at 10/19/2019 07:53:00 PM