Went out again today with the same setup.  I did move the foil back a notch (but it worked better with the last setting from yesterday).  The other thing I was noticing was breaching - I have been doing that more with this tail, and I've also felt the tail yaw out more also in comparison to the Kai tail. 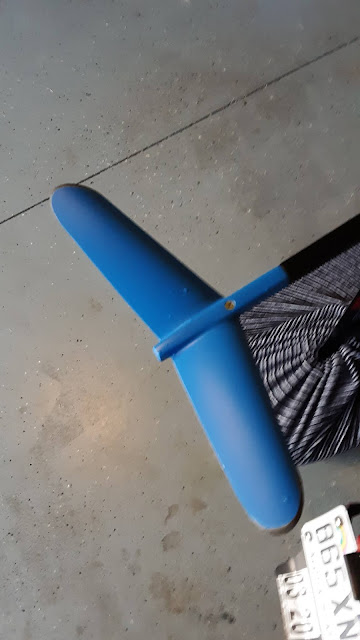 I think this is more an artifact of the tip geometry.

I got some long rides to the beach.  Had to paddle foil up to get back out.  The tide was dropping fast from a high of 1.8' (an hour earlier than when I was out) down to lower than I would want to be out with a foil in.  The Kona winds were also starting to kick up.  I like the extra lift of this wing, but I don't like the curve balls I'm getting pitched by it.  I'll put it on when the waves are smaller to get more glide (without the pumping), but if the waves are waist high, I'll use the kai.

I brought Marlon out to surf this session (he needed it - break from school).

There were several foils out there today - Dennis on an Armstrong CF1600, Ian on his Cloud IX, another guy on a Lift, and another guy with a Go Foil.  Fun times - just like the early days of kiting - but way better because you don't need wind!
Posted by Victor Velasco at 10/10/2019 08:43:00 PM