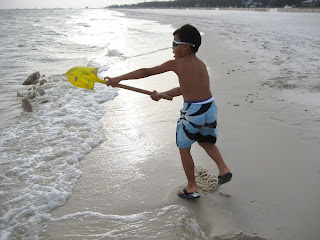 On the regular activity front, took the Naish Glide out for a 3 mile paddle yesterday. No wind, no swell so it was all me. I prefer the energy tapping methods, but I did enjoy the workout benefits.

Also the red shrimp we have finally hatch a new clutch. The tiny shrimp were around, but you had to look closely. I was getting worried if the population would die off (several have died over the past few weeks - I suspect old age more than anything), but there are still a couple more shrimp holding eggs.

On the new stuff front, we drove over to Bay St. Louis today and found a terrific launch for the trimaran. The southern part of the point, a quarter mile down from the railroad tracks is a great parking lot that is ridiculously close to the shore. It offers great access to the Gulf and is seems like to wind was less effected by the land. The morning seemed to have decent wind (8-12), but the afternoon fizzled out.

So, nothing new - another weekend of the same old stuff. Checking out downtown Bay St Louis reminded us of how cool it would be to have some bicycles to throw on the back of the van and cruise around for an afternoon.