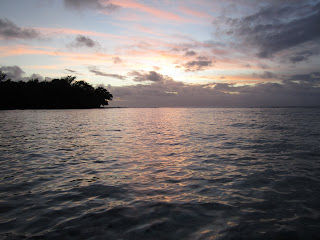 I hop in Mike's truck and we're off to go fishing. I bring the flyfishing gear today.

We hit "Cables" first. No bites, but some large fish were tailing in the shallows. We've seen them before at Cannon Point (I'll have to ask some of my workers what those are and what do they like to eat). No takers on fly or lure/squid - so we decided to go to Eclipse Bay.

Back in the water, the picture is of the view around 1900 - Orange and Purple Indian Ocean sunset. With the seasons changing, the winds are starting to die back to the "light, but steady" range. For reference think "16m kites on a surfboard" - soon it'll be a lake and flyfishing will reign.

Now back to fishing - I ended up catching another "MONSTER" - this time a tiny grouper - maybe 5". I did not get a chance to take a picture of it, but it was very eye catching.

I'll take it!!! I have no shame about catching the smallest fish. Two fish on the fly to date!!!