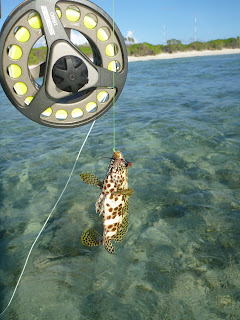 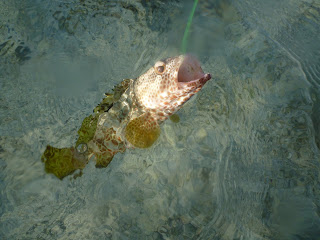 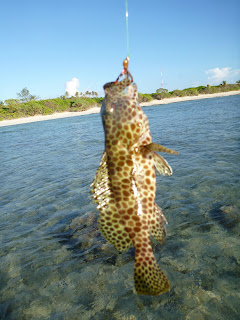 I started out flyfishing with a Bonefish Bitter fly. These grouper are feisty little fish.

I caught three of them (and one wrasse, but I didn't take a picture of it). Each one seemed to get smaller than the one before it.

These guys hide out under the rocks and coral heads - knowing the fish in the area you are at means you can always catch a fish.

BTW, everything except the last fish (in the last post, coming up in two posts) was caught and released.

The grouper in the second picture took the hook pretty deep, I had to go back in, grab a pliers and take the hook out. I went ahead and grabbed by light spinning rod and after the tiny guy in the picture with the fly reel for size comparison, I figured I try casting a lure.