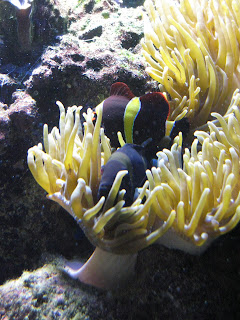 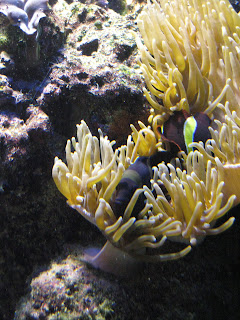 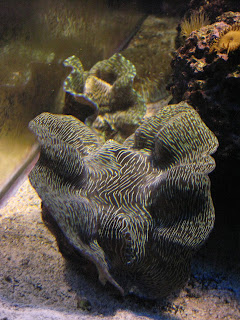 Not me - my mated pair of Solomon Islands Gold-Striped Maroon Clownfish (Premnas biaculatus) also known as the Spine-Cheeked Clownfish.

In the middle of the picture is their 7th clutch of eggs. Every two weeks these two have gotten it on and the result is about 150-200 offspring. They hatch out about 1.5 weeks later (only to become fish food - aaaahhhh the food chain is such an unmerciful force).

The other picture is my prized Giant Clam (Tridacna deresa). The one in the foreground has grown double it's size from when I first brought it home from a shop in Torrance (south LA). The one in the background has almost tripled it's size (it's a green-lipped variant with gray eyespots, while the former is a purple lipped/striped one). Everything but two hard corals have been doing extremely well this past month.