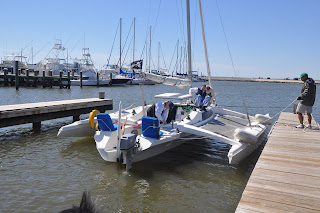 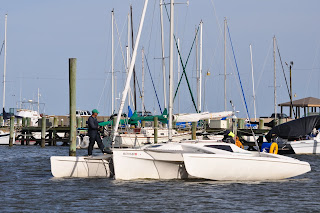 Yesterday was a bust - lots of wind but Marlon wasn't feeling well - twist my arm... I so rarely get to take a nap. No Dauphin Island kiting and shell hunting. However, after a nice long snooze session, we still took a drive down the beach to take in the beautiful weather.

Met up with Roger (owner/skipper of the F28 I'm crewing on) just before 1200. We were out sailing by 1250 and racing by 1345. We were doing nicely until around 1445 - between us and Gulfport (off the port bow) there was what looked like an overturned sailboat. It was a capsized boat that the owner, crew and several racers (all the boats dropped their sails to lend a hand) could not right. By the end of it all, the mast had floated off and the hull was just poking out of the water (all 13' of it - not that deep between mainland and the barrier islands). Hopefully the owners can get the boat salvaged (which they should).

That ended the race and we (Roger, Camille, Missy and I) headed back in. My GPS read 16.6 kts max speed - Roger's hull mounted speedometer read 14.7 kts max. Not bad. I think we would have easily taken first if circumstances didn't sink a boat today.