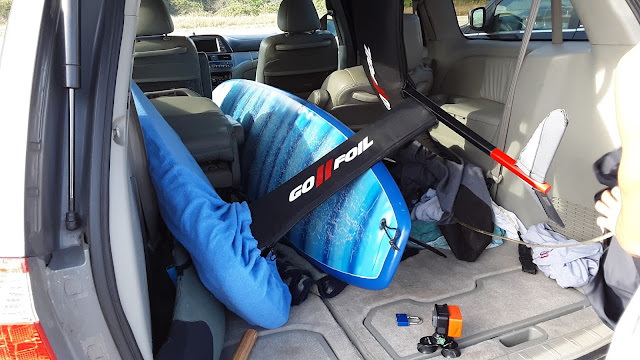 As we drove up to the parking lot, it looked small - and after going down and checking on it, I decided to swap out the Iwa and Kai tail for the Maliko 200.

The swell was about waist high on the sets, but predominantly thigh high.  There was barely any wind and the tide was good and high at 1.5' (which is why I brought the foil instead of the Viking).  This was my first foil session in a while - really since I got the Viking.  I paddled for a wave and ejected because of bad foot placement, but after that I pretty much had long rides.  I was at Fenceline for a while because the crowd at Sand Lots was really dense.  After riding a several all the way back to the beach, I went ahead and paddled over to Fenceline.  I had to bypass a few because they were too steep for the Maliko.  I did catch a bunch and I got the feeling for this foil again - by the last few waves, I was cranking hard turns (fun G-Forces!!!).  Morale of this story - don't be shy about bringing the extra wings to the beach.